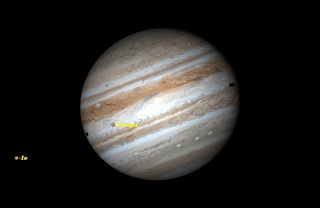 On the night of Monday (Dec. 8), we will see the first of a series of double shadow crossings on Jupiter. The moons Io and Europa will cast their shadows on opposite limbs of the giant planet.
(Image: © Starry Night software)

One of the treats awaiting owners of a new telescope is their first look at the giant planet Jupiter and its four tiny moons.

Even the smallest telescope will show that Jupiter has four moons, though in most they will be too small to appear as anything larger than a pinprick.

Jupiter's moons orbit the planet with periods ranging from 1 day and 18 hours for Io, to 16 days and 17 hours for Callisto. Because they orbit in a plane close to the ecliptic, the plane of the Earth's orbit, inevitably they pass in front of and behind Jupiter. [Take Our Jupiter Quiz]

When a moon passes in front of Jupiter, it is usually visible for a few minutes as it passes over Jupiter's limb, but it then disappears into the background of the planet's clouds. The only exceptions are the moons Ganymede and Callisto, which have a darker surface than Io and Europa, and these appear as tiny gray disks against the brighter clouds behind them.

Most of the time, the sun is shining from one side of the Earth or the other on Jupiter, so the moons all cast shadows on Jupiter’s cloud tops. Under steady viewing conditions, these shadows can be seen with any telescope larger than about 3.5 inches (90 mm) aperture.

Soon after Galileo Galilei first discovered Jupiter's moons in 1610, astronomers began recording these transits, occultations and eclipses, and found that they were predictable with extreme accuracy. In fact, Jupiter's moons behave like a giant clock with four hands, each moving at a different speed.

So accurate is the "Jupiter moon clock" that Ole Rømer used it to measure the speed of light in 1676. It was also proposed as a method for determining time, and hence longitude, for seafarers, but the difficulties of observing the moons from a pitching ship deck proved unworkable.

Nowadays, anyone with a small telescope can observe the changing positions of Jupiter's moons from night to night. Skygazers with larger telescopes can watch the moons and their shadows as they cross Jupiter's face.

Most of the time, only one moon or shadow is visible at a time, but sometimes the moons line up in such a way that two, or even three, cross Jupiter at the same time. This week we see the beginning of a series of these double and triple transits, beginning tonight (Dec. 8).

I’ll describe tonight's events as seen from eastern North America (Eastern Standard Time). Observers farther west will have to subtract one (CST) to three (PST) hours to get their local times.

By the time Jupiter is high enough to observe, around 11 p.m., the transit of Europa is already underway. The moon will appear on the left side of the planet and its shadow on the right, because the sun's light is effectively coming over our left shoulder.

At 11:20, a tiny notch will appear on Jupiter's left limb, as the shadow of Io begins across. Five minutes later, Europa's shadow begins to leave the disk. So for five minutes we will have had moon shadows on opposite edges of Jupiter.

If you miss this event, don't be too disappointed, because this is only the first of a whole series of double transits, leading up to a triple transit on the night of Jan. 24.

These transits are predicted years in advance, and the predictions can be found in the Observer’s Handbook of the Royal Astronomical Society of Canada, in astronomy magazines, and online. They are also depicted by astronomy software programs like Starry Night. But there is something special about observing them with your own eyes through a telescope.

Editor's note: If you snap an amazing telescope view of Jupiter, or any other night sky object, and would like to share it with Space.com, you can send images and comments in to managing editor Tariq Malik at: spacephotos@space.com.