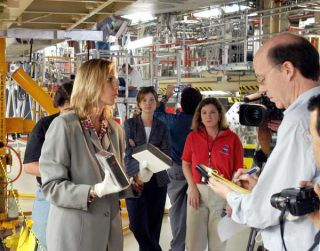 Efforts to ready the space shuttle Discovery for flight are gathering steam as NASA engineers passed key milestones for both the spacecraft and its rocket boosters.

Sitting in its hangar at NASA's Kennedy Space Center in Florida, Discovery has successfully been powered up by ground crews after more than 100 modifications to its systems and a series of upgrades specifically aimed at the agency's planned return to flight for the aging fleet.

Discovery vehicle manager Stephanie Stilson said she is "very optimistic" that the spacecraft is moving toward a launch next spring. Discovery is set to be the first shuttle to fly since the loss of Columbia in February 2003. Discovery, as part of the STS-114 mission, is expected to launch no earlier than March 6, 2005.

In addition to normal maintenance and enhancements, such as the installation of a "glass cockpit," shuttle engineers have equipped Discovery with electrical wiring and cables for 176 new sensors - 88 per wing - to measure acceleration, impact and temperature changes during launch. Wiring has also been laid for an external tank-watching digital camera and an anticipated boom that could be used to survey the shuttle's exterior for damage.

Engineers have also delivered the first segment for one of the shuttle's two solid rocket boosters (SRBs) on Aug. 9.

The segment, a skirt-shaped piece that forms the base of the rocket, was moved to a facility at the center where technicians will install an aft motor segment and ring fitting that will attach the rocket to Discovery's external tank.

While shuttle engineers toil away on Discovery's body, a team of propulsion specialists have completed testing on the last of three engines the spacecraft will use to reach orbit.

Engineers fired the engine for 520 seconds -- the flight time required to carry Discovery from launch to space - during a nighttime Aug. 19 test.

Miguel Rodriguez, NASA's director of the propulsion directorate at Stennis Space Center in Mississippi, told SPACE.com that engine will be shipped to KSC by early September for integration.

The first main engine has already been sent to Discovery, while a second is still awaiting shipment. Along with STS-114's engines, SSC engineers are also delivering three additional engines as part of normal redundancy procedures.

"It's one less thing to worry about for the [shuttle] engineers, so they can put all their effort into other areas," Rodriguez said. "All of us together, as a team, are very excited about it."