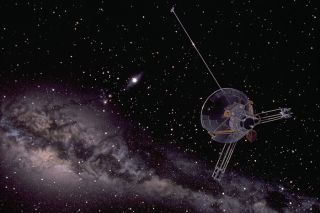 Christopher Phillips is a professional science communicator, astronomer, author and educator based in the Hawaiian Islands. Christopher's work specializes in planetary science, technology and the search for life in the universe. He contributed this article to Space.com's Expert Voices: Op-Ed & Insights.

The fate of the planet is once again at the forefront of the social consciousness with war, disease, environmental catastrophe and space travel dominating the headlines and entertainment media. We are once again looking to the future of life on and off the earth and weighing our chances.

Amongst the recent headlines is a rather staggering study in the Proceedings of the National Academy of Sciences that suggests human numbers are increasing at such a rate that even a third world war or global pandemic would not stop the global population from reaching an eye-watering 12 billion people by 2100.

In other corners of social consciousness, we have Christopher Nolan's new film "Interstellar," An epic tale of intrepid space travelers that set out into the cosmos to find another home for humanity, as it seeks to escape an ailing Earth.

Global news media and creative arts are transposed against a background noise of constant warfare, the Ebola crisis, and of course, concerns over climate change and resources.

From this aggregate of gloom and despair, one could be forgiven for thinking that life as we know it is doomed, that humanity's hubris and recklessness has brought it to the brink. This, however, could not be further from the truth. We are still far from the point of no return, and there is still much that we can do as a species to ensure the legacy we leave for our children and grand children is one of hope.

In studying the history of the human race, there is one conclusion that we most certainly derive: You should never underestimate the human species, especially in times of crisis.

So what are we to do? Well if we take a page from Christopher Nolan and the plethora of sci-fi directors and authors of years past, we should think about colonization of other worlds. We can spread the human seed so that no single catastrophe can wipe us from existence.

This is a fair and valid insurance strategy — you will find no argument from me on that point. However, colonizing the universe is an incredibly hard thing to do. It's not impossible, but just down right difficult. It's so difficult, in fact, that many of our sharpest minds wonder if it will ever be practical. The energy requirements and time necessary to travel between the stars is truly astronomical, far beyond our technological capability. In fact it may remain that way for thousands of years. There is also considerable debate amongst academics as to whether colonization of other star systems has even been achieved by the other intelligent technological civilizations we suspect may inhabit our galaxy. In fact this issue lies at the crux of the "Fermi paradox."

The Fermi paradox states that there should be a vast number of space-faring, intelligent species out there in our galaxy alone, and by all rights we should have run into them already — or at the very least found some evidence that they exist. After all, the Milky Way galaxy is abundant with the elements necessary to create life, as well as long-lived stars and countless planets that may possess conditions capable of nurturing that life.

Alas though, when we turn our eyes and ears toward the heavens we see and hear nothing.

Space is quiet, too quiet.

There is no sign of intelligent life or evidence of such life passing through our neighborhood.

Of course, we are still at the early stages of detecting and classifying planets around other stars, the exoplanets, and our technology may not be sufficiently sensitive to detect evidence of other advanced technological civilizations. There is a profound possibility that we arrive at when we consider the Fermi paradox: the possibility that we are, in fact, alone. Another possibility is that colonizing the stars may just be too difficult, so difficult that space-faring civilizations shy away from such endeavors, perhaps preferring to stay at home.

So let's ask ourselves a question: Do we really need to colonize the galaxy? Isn't it possible for us to stay home and spend our time and energy in a more productive way and still preserve life on Earth?

Well it may be possible to do just that. We do not necessarily need to engage in the colonization of other star systems, because everything we need to perpetuate our species, and the species we share the Earth with, exists right here in our solar system.

Our solar system is abundant with natural resources, everything we need to survive and prosper sits right within reach. We have rich planets and moons that have been found to contain metals and minerals in their crusts. There are valuable ices found throughout the solar system in such abundance that our population could expand one hundred, one thousand, or one million times and not feel the pinch.

There are also countless asteroids and comets, again full of all these rich ingredients we need as a civilization. The amount of resources that exist within our solar system could sustain us for millions of years.

What we don't have, at least now, is another suitable planet to migrate to.

The other worlds of our solar system are configured very differently from our own Earth. Even Mars and Venus, our two most viable options, are not suitable for life as we know it. Even if we were to engineer their environments, they still possess fundamental characteristics that make maintaining an engineered atmosphere extremely challenging. This is beside the fact that geo-engineering on a planetary scale would take hundreds of years.

There is another option on the table. It would require an ambitious vision and unprecedented effort, but it could provide all the living space life on Earth would ever need, in a much shorter time frame.

We could build habitats within our solar system.

With just a century or so of technological development, humanity would be in a position to construct habitats throughout the solar system that would provide almost limitless real estate for life to thrive.

This is not a new idea —  the concept of space habitats has proven very popular with science fiction authors and academics for decades. One of the most famous examples of such a habitat is the ring world from Larry Niven's titular series of science fiction novels. Another example of such a habitat is a Dyson Sphere, a vast construct that encloses the host star and provides unlimited access to power from the sun and more living space than we could dream of.

A more recent example from popular culture is the "Halo" from the popular Xbox video game series, and of course there is the vast space station featured in the film "Elysium."

Right now, the construction of such habitats is tantalizingly out of reach, but with a few small advances in material sciences, nanotechnology and engineering we could fulfill such an ambitious vision of the future.

So there we have it, there is no need to go gallivanting amongst the stars, where we are not even guaranteed to find a suitable world. We can stay right home in the comfort of our own solar system. The sun and its family of celestial bodies can provide everything we need for as long as we need it. Only the aging and eventual death of the sun, several billion years from now, can spur us to leave. Right now, the solar system is where it's at. Perhaps that's why no other technological civilization has bothered to colonize the galaxy — why leave your homestead when it has everything you need?