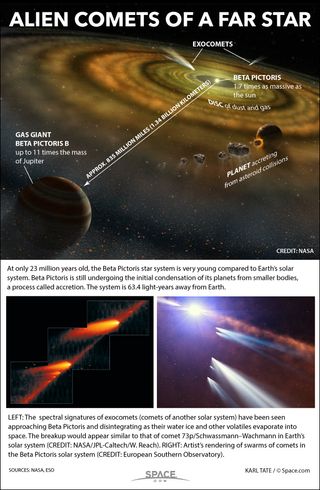 Astronomers have detected the signatures of hundreds of comets disintegrating in a distant, chaotic solar system 63 light-years away.
(Image: © by Karl Tate, Infographics Artist)

At only 23 million years old, the Beta Pictoris star system is very young compared to Earth's solar system. Beta Pictoris is still undergoing the initial condensation of its planets from smaller bodies, a process called accretion. The system is 63.4 light-years away from Earth in the constellation Pictors, the Painter's Easel.

Full Story: Hundreds of 'Exocomets' Around Nearby Star Come in Two Flavors

The spectral signatures of exocomets (comets of another solar system) have been seen approaching Beta Pictoris and disintegrating as their water ice and other volatiles evaporate into space. Researchers say they have discovered two distinct families of comets around Beta Pictoris.

Hundreds Of Comets Spotted Around Nearby Star | Artist Impression Video

The exocomets at Beta Pictoris are not the only oddity around the young star. The star is also home the Beta Pictoris b, a huge gas giant planet 10 times the mass of Jupiter that is the fastest spinning alien planet ever known. The planet spins at a rate of about 62,000 mph (100,000 km/h), with a single day on the planet lasting just eight hours.