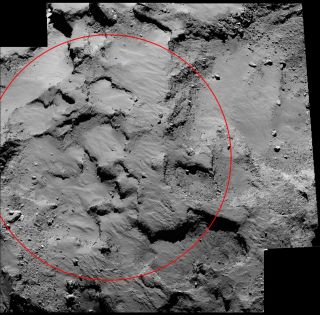 The European Space Agency (ESA) doesn't want the first-ever soft landing on a comet to take place at "Site J."

ESA officials are asking the public to come up with a better name for the spot on Comet 67P/Churyumov-Gerasimenko where the Rosetta mission will drop a lander during a historic, unprecedented maneuver on Nov. 12. If your entry is selected, you'll have a chance to watch the landing live from ESA's mission control center in Darmstadt, Germany.

"The rules are simple: you can propose any name you like, but it must not be the name of a person. You must also provide a short (up to 200 words) description as to why you have selected this name. You may enter in any European language," ESA officials wrote in a description of the competition, which can be found here.

The $1.3 billion Rosetta mission launched in March 2004 and finally caught up with Comet 67P this year. On Aug. 6, the Rosetta mothership became the first spacecraft ever to enter orbit around a comet. Mission officials hope to make some more history with the bold Nov. 12 attempt, which will send a lander named Philae spiraling slowly down to 67P's surface.

If all goes according to plan, Philae will take the first photos from the surface of a comet and collect samples for analysis. The larger Rosetta spacecraft, meanwhile, will remain in orbit around 67P, studying the 2.5-mile-wide (4 kilometers) comet with a variety of instruments as it gets closer and closer to the sun.

Observations by both probes should help researchers better understand the composition and behavior of comets, which are icy remnants left over from the solar system's formation 4.6 billion years ago, mission officials say.

Comet 67P's orbit takes about 6.5 years. On this pass, the comet will come closest to the sun in August 2015. The Rosetta mission is scheduled to continue gathering data through at least December 2015.