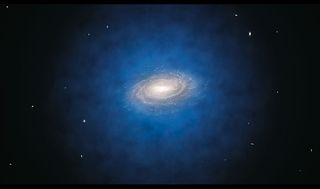 An artist's impression of the Milky Way galaxy. The dark matter halo, shown in blue, is not actually visible.
(Image: © ESO/L. Calcada)

For years, mysterious dark matter has eluded scientists, and now, a new study shows there may be less of it to find.

Using a century-old equation, scientists have found that the Milky Way galaxy holds half as much dark matter — the invisible stuff believed to make up a sizable chunk of the universe — as scientists had previously thought.

By calculating the speed of stars throughout the galaxy and conducting a detailed study of the Milky Way's outer edges, a team of astronomers in Australia determined that the amount of the unseen dark matter in the galaxy is just 80 billion times the mass of the sun — half the mass of recent estimates. [Gallery: Dark Matter Throughout the Universe]

In the 1950s, scientists determined that galaxies contain more matter than the human eye can see. The everyday material humans can see is made of baryonic matter, and it contains protons, neutrons and electrons. Scientists think dark matter may be composed of baryonic matter, nonbaryonic matter or a mixture of the two. Several possibilities for the material have been raised in recent years.

"Stars, dust, you and me — all the things that we see — only make up about 4 percent of the entire universe," study lead author Prajwal Kafle, from the University of Western Australia, said in a statement. "About 25 percent is dark matter, and the rest is dark energy."

In determining that the Milky Way contains less dark matter than previously thought, Kafle and his fellow researchers gained insight into a problem that theorists have been struggling with for almost 20 years.

"The current idea of galaxy formation and evolution, called the Lambda Cold Dark Matter Theory, predicts that there should be a handful of big satellite galaxies around the Milky Way that are visible with the naked eye, but we don't see that," Kafle said. "When you use our measurement of the mass of the dark matter, the theory predicts that there should only be three satellite galaxies out there, which is exactly what we see — the Large Magellanic Cloud, the Small Magellanic Cloud and the Sagittarius Dwarf [Spheroidal] galaxy."

The study was detailed Oct. 10 in The Astrophysical Journal.