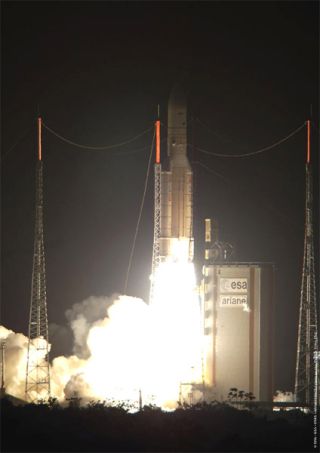 Ariane 5 clears the launch tower as it climbs out under the power of its Vulcain main engine and its two solid rocket motors. Liftoff was made at the start of a 37 minute launch window, and the Ariane 5 went on to deploy the JCSAT-10 and Syracuse 3B satellites in a highly accurate geostationary transfer orbit.
(Image: © Arianespace.)

A heavy-lifting Ariane 5rocket gave two communications satellites a smooth ride into space Friday in alaunch originating from a European-run spaceport nestled in the South Americanjungle.

Liftoff of the Ariane 5came at 2215 GMT (6:15 p.m. EDT) from the ELA-3 launch pad in Kourou, French Guiana. The rocket rose away from South America's northeast coast and flew on aneasterly path across the Atlantic Ocean before deploying its two payloadsseveral minutes apart about a half-hour after launch.

Arianespace officials saidthe mission went off without a hitch, marking the 14th straight success for theAriane 5 rocket since 2003. Friday's flight was also the 28th launch for thebooster since debuting in 1996, and the third for the vehicle this year.

"Tonight's success isparticularly exemplary, and perfectly illustrates why we have launched a totalof 237 satellites during the past 26 years - which, by far, is a worldrecord," said Arianespace CEO Jean-Yves Le Gall shortly after the missioncame to a conclusion.

The Ariane 5 also used ahigh-performance cryogenic upper stage with a heritage engine from the defunctAriane 4 program. This version of the rocket - called the Ariane 5 ECA - allowsthe launcher to haul two large satellites into orbit on a single mission.

Shrouded inside the Ariane5's stretched payload fairing were the JCSAT 10 commercial communicationssatellite for Japan and the Syracuse 3B military communications bird for theFrench defense ministry. Both payloads were placed in similar transfer orbitswith an approximate high point of 22,000 miles.

In the coming weeks, JCSAT10 will fire its on-board propulsion system to guide itself into a circulargeostationary orbit about 22,300 miles high, where its velocity will match theEarth's rotation. Officials currently plan to place the spacecraft in a slotalong the Equator at 128 degrees East longitude, where its 30 Ku-band and 12C-band transponders will reach users in a wide area stretching from Japan and Southeast Asia to Hawaii.

The almost 9,000-poundsatellite was manufactured by Lockheed Martin for a planned 15-year mission.The new craft is designed to replace the aging JCSAT 3 platform launched in1995. The satellite's responsibilities will include digital video broadcastingand data transmission services, including a critical role in JSAT's SKYPerfecTV! direct broadcasting program.

France's Syracuse 3B defensecommunications satellite was deployed from the upper stage almost six minuteslater. Like JCSAT 10, it will also soon be maneuvered into geostationary orbit,but in a location where it will appear to hover above the Equator at 5 degreesWest longitude.

The Syracuse system waspressed into service in 1985 and has since provided secure communicationsbetween the French government and deployed military units. Three incarnationsof the program have been in service throughout the past 20 years, with thelatest series bringing more capability, security, and operational flexibilitythan ever before.

Built by Alcatel AleniaSpace, Syracuse 3B carries a total of 15 channels split between the super highfrequency and extremely high frequency bands. The 8,267-pound spacecraft isexpected to work for up to 12 years linking senior French government andmilitary leaders with soldiers in the field. Communications using the Syracuse 3 satellites are also heavily secured using anti-jamming technology.

In addition to voice anddata relay transmissions, Syracuse 3B can also provide telephony services,military intranet networks, and videoconferencing to its users.

The next Ariane 5 launch isscheduled for September 19 with the American DirecTV 9S and Australian Optus D1communications satellites. A Japanese technology demonstration mission willalso fly into space aboard the Ariane 5 as a secondary payload.