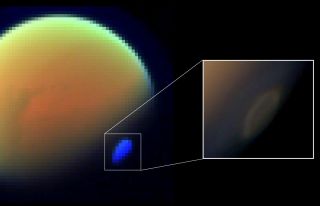 The giant swirling cloud on Saturn's largest moon Titan is seen here in two images from NASA's Cassini spacecraft. At left is a spectral map of the cloud taken on Nov. 29, 2012. The inset at right is a natural color view of the cloud. Scientists have discovered that the cloud is made up of toxic cyanide.
(Image: © NASA/JPL-Caltech/ASI/University of Arizona/SSI/Leiden Observatory and SRON)

nature: It's made of cyanide gas.

The discovery suggests that the air above Titan's poles can get much cooler than previously thought, scientists said. The huge cloud on Titan — it's about the size of Egypt — was first spotted by NASA's Cassini spacecraft in 2012, but only now is its cyanide composition understood.

"The cloud was first seen in images from Cassini's cameras taken in 2012," study co-author Nick Teanby at the University of Bristol in England said in a statement. "It started off quite small but soon grew to cover the entire south polar region. This was totally unexpected and set us puzzling over what the cloud could be made of."

Surprisingly, Cassini found the cloud existed at very high altitudes, about 180 miles (300 km). The presence of a cloud at such heights is unexpected because previous estimates of the temperatures at this altitude have been too high to allow cloud formation.

Unfortunately, while the Cassini images showed that the cloud was very high up, "they did not allow us to figure out what the cloud was actually made of or why it was there," Teanby said in a statement.

Now, after analyzing two more years of data from Cassini, the researchers found this cloud is made of cyanide — specifically, "ice particles of hydrogen cyanide, or 'blauwzuur,' blue acid, as it's known in the Netherlands, which is highly toxic," lead study author Remco de Kok, a planetary scientist at Leiden University in the Netherlands, said in a statement.

"Hydrogen cyanide ice was quite surprising, and not expected at this location," de Kok told Space.com.

This new finding reveals that the polar atmosphere above Titan's south pole must be extremely cold to allow hydrogen cyanide to condense, much cooler than thought possible at those altitudes — minus 234 degrees F (minus 148 degrees C), about 180 F (100 C) colder than once predicted.

The researchers said that very dramatic cooling must be taking place inside the winter vortex of winds over Titan's south pole.

"There may be gases present there that radiate a lot of energy away in the infrared, cooling the atmosphere there," de Kok said.

Titan's atmosphere is experiencing a change of seasons, with spring arriving in the north and autumn in the south. Titan has seasons just like Earth, only each season lasts more than seven years instead of three months.

In 2015, Cassini will peer at Titan to help see how cold Titan's south pole is, de Kok noted. "It is exciting thinking about how the cloud might develop in that time," he said.

The Titan cyanide cloud study is detailed in the Oct. 2 edition of the journal Nature.