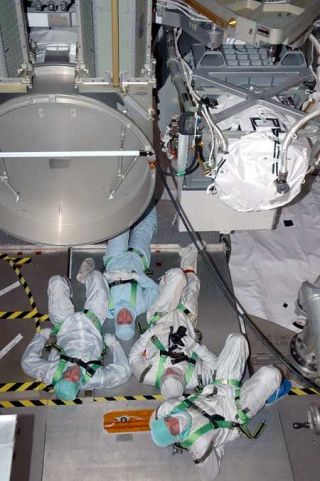 In the payload changeout room on Launch Pad 39B, STS-115 crew members look over the mission payload one more time before launch. The mission crew has been at KSC to take part in Terminal Countdown Demonstration Test activities, which include emergency egress training, a simulated launch countdown and the payload familiarization.
(Image: © NASA/Cory Huston)

CAPE CANAVERAL - The Atlantis astronauts capped a practice countdown Thursday with a drill theynever want to go through for real: A launch tower escape.

Theastronauts expeditiously exited the orbiter, heading to metal baskets thatwould whisk them off the 36-story gantry and down to the ground in anemergency. The exercise is considered crucial in the training of any astronautcrew.

"Itreally exemplifies the complications that they would have to go through ifthere were an emergency on launch day," said NASA Test Director JeffreySpaulding, who orchestrated the operation from the KSC Launch Control Center.

"There'snothing like trying to do it when you have your launch-and-entry suit on andyou're strapped into the vehicle," he added. "It's good training forthem."

In 115shuttle flights to date, NASA has experienced five "pad aborts" --engine shutdowns within seconds of the ignition of the shuttle's two solidrocket boosters.

Theorbiter's three liquid-fueled engines ignite 6.6 seconds prior to launch. Thestart-up is performed to make sure the engines are operating properly beforebooster ignition and liftoff.

Theemergency drill is the only opportunity for the Atlantis astronauts to practicea launch tower escape prior to their planned Aug. 27 flight.

Bunched intwo groups of three, the astronauts hurried across the orbiter access arm,which is a metal walkway that leads to the shuttle's side hatch. Then theycrossed the 195-foot level of the gantry and climbed into escape baskets.

In a realemergency, the astronauts would ride the baskets down a 1,200-foot slidewire toa bunker on the western perimeter of the pad.

The drillcame at the end of a practice countdown that served as a launch-day dressrehearsal for the crew and 150 to 200 engineers in the control center. It's theonly time an astronaut crew suits up and boards a shuttle prior to launch day.

"Thisgives them an opportunity to work with the folks they are going to be workingwith on launch day, and for us, it's a chance to work with them directly in apseudo-launch-type environment," Spaulding said.

The realthree-day launch countdown is scheduled to begin Aug. 24.

Led byveteran astronaut Brent Jett, the Atlantis crew plans to carry out the firstInternational Space Station assembly mission since the February 2003 Columbia accident. The main goal is to add a17-ton section to the left side of the station's central truss.