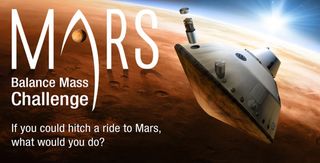 NASA wants makers of the world to dream up part of a Mars probe under its Mars Balance Mass Challenge. Ideas are due by Nov. 21.
(Image: © NASA)

NEW YORK — NASA has challenged the public to design part of a spacecraft that could land future spaceflyers on the surface of Mars.

The so-called NASA Mars Balance Mass Challenge officially opened Saturday, and will draw to a close on Nov. 21. The agency will announce the winning design in January 2015, and the winner will receive a grand prize of $20,000.

Humanity has had its eyes set on Mars since the 1960s. In the 1970s, NASA began landing spacecraft on Mars, and in the 1990s, wheeled robots started exploring the surface. In 2012, NASA's Curiosity rover touched down on the Red Planet in spectacular fashion.

But now, the agency is looking ahead to future manned missons crewed by the first "Marsonauts."

But landing a spacecraft on Mars is no small feat. The Curiosity rover needed to be perfectly balanced when it was hurtling toward the Red Planet in 2012. But when it approached the Martian atmosphere, the craft ejected two 154-pound (70 kilograms) weights. This disrupted the spacecraft's balance, which helped it slow down as it slipped into the alien atmosphere. But just before it landed, the spacecraft released six other 55-pound (25 kg) weights to rebalance the craft so that it could land safely.

This meticulous balancing act is complicated, and that's where the public comes in, Miller said. NASA is challenging the public to design balancing weights that are up to 330 lbs. (150 kg) that can serve a dual purpose. In addition to helping keep the spacecraft balanced, NASA scientists want the weights to double as scientific instruments to collect data and take measurements of the Red Planet.

There are also a lot of technical problems to sort out, Miller said. NASA scientists and engineers are developing laser technology for communication. Lasers can send more data than radio waves and can transmit information faster. This could improve communication between Earth and Mars, Miller said.

NASA and other commercial spaceflight companies are also working on designing lighter rockets that are capable of carrying heavier payloads. This is useful because "we'll need to bring a lot of stuff with us" if humans set up long-term settlements on Mars, Miller said.

NASA's exhibit at the World Maker Faire included information on other ways citizens can get involved with the agency's missions, including how to launch miniature satellites called CubeSats into space, and how to participate in the Asteroid Grand Challenge, which involves identifying asteroids that could hit Earth, and brainstorming ways to divert them. A list of all current NASA challenges are available on the NASASolve website.