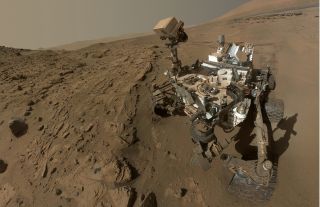 NASA's Mars rover Curiosity captured this self-portrait during April and May in 2014 during its second year on the Red Planet. A recent recent NASA Planetary Senior Review Panel report has criticized the science plan for the mission, but NASA officials defended the science program in a Sept. 11 briefing.
(Image: © NASA/JPL-Caltech/MSSS)

PASADENA, Calif. — NASA is staunchly defending the science plans for its flagship Mars rover Curiosity in the wake of a recent senior-level review that at times harshly criticized the mission's science operations.

Mission scientists announced Thursday (Sept. 11) that the car-size Curiosity rover has reached the base of Mount Sharp, a 3-mile-high (5 kilometers) mountain rising from the center of the rover's Gale Crater landing site. Curiosity had been driving toward the mountain since it landed on Mars in 2012.

Jim Green, NASA's director of planetary science, was quick to point out Curiosity's early success, citing the rover's discovery that Mars was once a habitable world in the ancient past — a key mission goal. The rover landed in August 2012 to begin a two-year primary mission.

"It immediately hit the jackpot," Green said with enthusiasm during the news conference here at NASA's Jet Propulsion Laboratory. "Curiosity explored Yellowknife Bay and found that it was in an ancient lake-bed environment that several billion years ago offered fresh water and all the key ingredients for life and a chemical source for microbes, if indeed any existed at that time."

But the NASA-commissioned report was less enthusiastic. The NASA Planetary Senior Review Panel, chaired by Clive Neal of the University of Notre Dame in Indiana, gave Curiosity's Mars Science Laboratory mission low marks for scientific return, placing the rover toward the bottom of the seven missions under review.

While all seven missions were ultimately approved for ongoing funding, the panel was not upbeat about Curiosity's prospects during the mission extension. The panel stated that the recently released plan for the next two years of Curiosity's operations on Mars "lacked specific scientific questions and testable hypotheses," and suggested that the mission should do more drilling and less driving to justify the continued funding of $59 million.

The panel's report also pointed out that the team intended to drill just eight samples in the upcoming funding period — a plan that "the panel considered a poor science return for such a large investment." [Curiosity Quiz: Test Your Mars Rover Smarts]

The report went on to be specifically critical of Curiosity rover project scientist John Grotzinger, complaining that he was present only by phone for one round of discussion, and sent a deputy to respond to the next. "This left the panel with the impression that they were too big to fail," the report added.

Green responded to the latter comment by pointing out that Grotzinger had discussed the situation in advance with NASA management.

"We had already approved John to be at [another] particular activity," Green said, adding that for whatever reason, the review panel "either didn't receive the information or didn't understand that."

Besides being the science team leader for Curiosity, Grotzinger is also a professor at the California Institute of Technology (Caltech) and has many other responsibilities pertaining to that post. Caltech manages JPL for NASA.

When queried about the report's assertions that the number of drill samples was insufficient, Grotzinger said: "When you get that drill out, there is always a risk. So we would rather take an approach that we drill less, protecting it."

Grotzinger added that "the fickle nature of the preservation of organic matter is probably best handled by drilling a greater diversity of samples a fewer number of times." Curiosity's drill, like its wheels and the onboard instrumentation, is a "consumable," meaning that it has a limited life span, he added.

Green further responded to multiple questions about the critical portions of the report by saying that it was not something authored or edited by NASA, and that it was from an independent review panel.

"We don't filter their comments; we don't edit them out; we don't black out their opinions. We [solicited them], we got them and we're acting on them," Green said.

Among the other NASA planetary missions included in the panel's review were the flagship Cassini spacecraft currently exploring Saturn, as well as lunar orbital programs and other Mars missions.

"For me, the top recommendation is really how important these missions are as we move forward," Green said

Referring to the recently granted mission extension to Mount Sharp, Grotzinger noted that the science team's current "go-to" mission design was working well. In that "go-to" approach, a target science destination can be miles away from a rover's initial landing zone. A similar approach is expected for NASA's planned 2020 Mars rover mission, which will borrow much of its design from Curiosity.

"It's all about risk versus reward," Grotzinger said. "Mars 2020 will have to go through the same thing, and 'go-to' will be a very big deal. Landing ellipses will get smaller, but the best geology will always be in places that are outside of those safe landing spots. We have just proved the 'go-to' concept is valid."

After two years on Mars, Grotzinger summed up Curiosity's progress by saying that the rover's science phase is shifting into a new, and higher, gear.

"The next phase of research for Curiosity on Mars can now begin," he said. "We have finally arrived at the far frontier that we have sought for so long."

Editor's note: This story was updated on Saturday, Sept. 13, to correct the amount of funding for Curiosity's extended mission. It is $59 million, not $155 million.