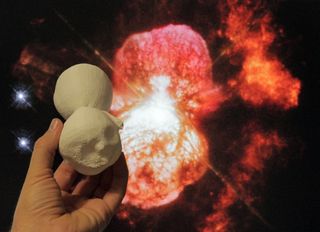 A 3D-printed model of the Homunculus Nebula is compared to a Hubble Space Telescope image of the same object in this NASA photo.
(Image: © NASA's Goddard Space Flight Center/Ed Campion)

A double-lobed star explosion seen by the Hubble Space Telescope has a more complicated backstory than astronomers ever imagined, according to a 3D model of the ill-fated star's eruption.

A 3D model of the Homunculus Nebula in Eta Carinae — some 7,500 light-years from Earth — shows the aftermath of the burst that gave rise to the nebula. The nebula itself is riveted with holes at each end, has deep trenches and include protrusions shaped like arms, among other features. You can explore a video of the nebula's 3D rendering as well.

"Our model indicates that this vast shell of gas and dust has a more complex origin than is generally assumed," Thomas Madura, a team member who is a postdoctoral fellow at NASA's Goddard Space Flight Center in Greenbelt, Maryland, said in a statement. [Gallery: Strange Nebula Shapes, What Do You See?]

"For the first time, we see evidence suggesting that intense interactions between the stars in the central binary played a significant role in sculpting the nebula we see today," he added.

The binary stars of Eta Carinae — one of which is 30 times the mass of the sun, and the other 90 times as massive — experienced "unusual variability" between the years 1838 and 1845, according to NASA. This variability produced a glow so bright it briefly became the second-brightest star in Earth's sky.

During this period of time, the stars sent out a blast of gas that was between 10 and 40 times the sun's mass — an event astronomers call the Great Eruption. The cloud is still expanding today at a rate of more than 1.3 million mph (2.1 million km/h).

More than 170 years after the explosion, the cloud — dubbed the Homunculus Nebula — is now about one light-year long. Astronomers mapped the nebula using the European Southern Observatory's Very Large Telescope in March 2012, over two nights, in visible, infrared and ultraviolet wavelengths.

To make the map, astronomers focused on an emission line of near-infrared light that is created by molecular hydrogen gas emissions. Because the light changes wavelength depending on how quickly the gas is moving and where it is going, this allowed the scientists to look even in the lobe facing away from Earth's view.

"One of the questions we set out to answer with this study is whether the Homunculus contains any imprint of the star's binary nature, since previous efforts to explain its shape have assumed that both lobes were more or less identical and symmetric around their long axis," team member Jose Groh, an astronomer at Geneva University in Switzerland, said in a statement. "The new features strongly suggest that interactions between Eta Carinae's stars helped mold the Homunculus."

Astronomers also converted their model into a format suitable for a 3D printer. They published the design, along with their findings, online in the journal Monthly Notices of the Royal Astronomical Society.