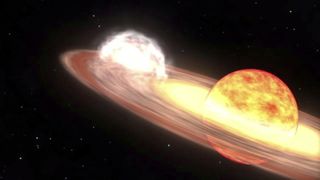 The star V407 Cyg explodes in a nova (left) while circling a neighboring red giant star in this still from a NASA animation depicting the star explosion detected in 2010. Scientists say such novas can unleash powerful gamma rays, but how the radiation is created is still uncertain.
(Image: © NASA/Goddard Space Flight Center/ Conceptual Image Lab)

Gamma-rays, the most powerful form of light, may erupt from star explosions called novas surprisingly often, but the way these gamma-rays form remains a mystery, scientists say.

High-energy gamma-rays are typically associated with supernovas, the explosive deaths of stars. These explosions are bright enough to momentarily outshine their entire galaxies.

In a cosmic twist, astronomers recently discovered that a less powerful explosion, known as a nova, could give off high-energy gamma-rays as well. Novas originate in binary systems, where two stars orbit each other — they occur when a white dwarf star becomes engorged with hydrogen fuel given to it by its companion star. When enough hydrogen accumulates, this fuel ignites, leading to cataclysmic nuclear explosions and a sudden brightening of the white dwarf. Novas are much dimmer than their brighter supernova brethren, and do not destroy their progenitor stars as supernovas do. [The 10 Biggest Gamma-Ray Blasts in Space]

"Novae and supernovae are some of the earliest recognized celestial events, being recorded throughout human history," said study co-author Teddy Cheung, an astrophysicist at the U.S. Naval Research Laboratory in Washington, D.C. Novas are far more common than supernovas; there are about 20 to 50 novas per year in the Milky Way, compared with about one supernova per century in the galaxy.

In 2010, astronomers detected high-energy gamma-rays from the nova V407 Cyg about 8,800 light-years away in the constellation Cygnus the Swan. This eruption gave off the equivalent of about 1,000 times the energy emitted by the sun every year.

The researchers later found this gamma-ray nova originated in an unusual kind of binary system known as a symbiotic binary, which is made up of a small hot star and a cool giant star. A key trait of symbiotic binaries are the very dense winds of matter that blow from the giants — in the case of the system that gave birth to the nova V407 Cyg, the giant sheds enough hydrogen gas each decade to equal the mass of Earth. Because symbiotic binaries are rare, it was uncertain whether gamma-ray novas were equally rare.

Now, scientists have found more ordinary novas can give off high-energy gamma-rays, too. Their discovery suggests that gamma-ray emissions may be common from novas.

Prior studies had estimated that there were one to four novas per year within about 16,300 light-years from Earth. These new findings, however, suggest that novas that give off gamma-rays occur about once per year within that distance.

The new study by Cheung and colleagues is detailed in the Aug. 1 edition of the journal Science.

It remains uncertain how these three newfound classical novas generated gamma-rays. When it came to 2010 nova V407 Cyg, the symbiotic binary system where the explosion took place created an environment that astronomers said might spur high-energy gamma-ray production.

When the V407 Cyg nova exploded, the blast wave smashed into the dense winds from the giant star in the system, heating matter up enough for it to give off gamma-rays. However, the binary systems that gave rise to these newfound novas do not have stars that give off dense winds.

The researchers suggested that these classical novas might have given birth to gamma-rays when their blast waves ran into interstellar gas and dust. Alternatively, each blast wave might have turbulently interacted with itself to generate this high-energy light.

"We anticipate more gamma-ray novae to be detected, and new observations of more examples will shed light on the gamma-ray mechanism in novae in general," Cheung told Space.com.