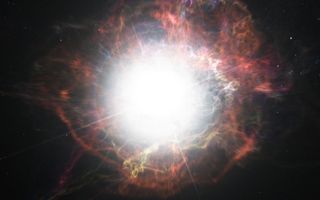 This artist's impression shows the dust forming around a supernova after the explosive death of a star. Astronomers using the European Southern Observatory's Very Large Telescope have found that dust grains form in a two-stage process.
(Image: © ESO/M. Kornmesser)

A violent supernova in a distant galaxy has helped scientists solve a long-standing mystery into the birth of cosmic dust in the universe.

These grains of space dust are building blocks for stars and planets. But the high temperatures and fast-moving material created by supernovas, the explosive deaths of stars, have long been considered unsuitable for forming dust, which requires cooler temperatures and less-violent interactions.

Researchers made the discovery after taking the first direct measurements of how the dust around supernova absorbs both visible and infrared light. The new research not only sheds light on the two-stage process that spawns cosmic dust, but also revealed that the newly-created dust particles are significantly larger than those seen in the Milky Way today. [Supernova Photos: Great Images of Star Explosions]

According to principle author Christa Gall, of Aarhus University in Denmark, the large grains "can better resist subsequent destruction in the harsh environment of the supernova remnant, and thus the majority of the dust can be retained."

Complicating their study, these grains of dust interfere with scientific measurements. Astronomers must peer through the dust to see the objects beyond it, which requires a knowledge of the characteristics of these dust particles. The source of dust has similarly remained a challenge to pin down.

"Observations show that there is a lot of dust in galaxies, but it is unclear how it was produced," Gall told Space.com by email.

The sun and similar stars shed dust and material in slow winds, particularly as the stars reach the ends of their lives, but Gall said these are not major dust producers.

Supernovas, however, make excellent candidates for dust production. At the end of its lifetime, a star processes through fusion, forming a variety of elements in its core at each stage. Finally, it explodes, blowing its innards outward through space. But the high temperatures and fast-moving material create an environment that didn't appear conducive to forming dust grains from the gas.

"Dust production happens when the densities and temperatures of the dust-forming medium are just right," Gall said.

To make solving the mystery even more difficult, the study of young supernovae poses its own problems.

"It's challenging to pin down where dust forms, because there are not that many massive star explosions. Most of the ones in our galaxy are, in fact, hidden from us by dust," Haley Gomez, of Cardiff University in the United Kingdom, told Space.com by email.

"The handful of explosions studied in detail so far tend to be ancient explosions, which occurred 400 to 1,000 years ago."

Gomez, who studies stellar dust, was not part of Gall's team, but authored a corresponding News & Views article. Both the research and the article were published online today (July 9) in the journal Nature.

The explosion of the extremely bright supernova SN2010jl in 2010 created a perfect opportunity to monitor dust formation in action. Located in the galaxy UGC 5189A, about 160 million light-years from Earth, the supernova was about 10 times brighter than a typical supernova in optical light. Scientists estimate that it exploded approximately a month before it was identified.

Gall and her team studied the supernova nine times in the months immediately following the discovery, and again two-and-a-half years after the explosion, using the European Space Observatory's Very Large Telescope in northern Chile.

In a star's last stages of life, material peels off the star's surface. When the star explodes, a shock wave tears through this material, vaporizing existing dust. Soon after, dust grains of carbon form in a dense shell of material that follows the wave, where temperatures are cool enough to allow dust to condense from the gas, creating the first phase of dust formation.

As more time passes, the growing clouds of dust cool the remaining supernova gas to temperatures that launch a second phase of dust formation.

Studies of older supernovae, such as SN 1987A and the Crab Nebula, show collections of cosmic dust that reach up to one-half the mass of the sun. However, these supernovae are hundreds of years old. Gall predicted that SN 2010jl would reach similar quantities of dust in the next 30 years.

"The supernova is still very young, and the final dust mass has not been reached yet," Gall said. "If the current trend of dust formation continues, then SN 2010jl may reach such large dust masses."

Gall and her team also estimated the size of the dust grains formed after a supernova. They determined that the dust particles reached diameters larger than 4 thousandths of a millimeter, up to 16 times larger than the maximum grain sizes of the Milky Way galaxy.

Over time, shocks from other supernova and collisions with other cosmic dust whittle down the sizes of these massive particles. But overall, the majority of the dust created from the ghost of the star is retained.

"It isn't clear how dust particles can get this big so quickly," Gomez said. "But it's really good news, because this suggests that the particles will be hardy and tough, and resilient to the shattering and collisions in the supernova environment."