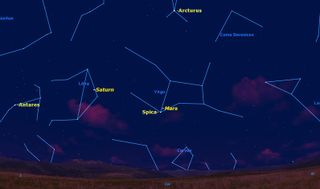 The July night sky is filled with planets to the delight of stargazers and astronomers, but you'll have to know when and where to look to get your summer solar system fix.

All through July, the planet Mars and the bright star Spica glow in the west-southwest sky during the evening hours. Saturn, the so-called "Lord of the Rings," can be found to that pair's left and will climb a bit higher (and set a bit later) each night.

Toward the end of the night this month, Venus and Mercury rise up in the dawn twilight above the east-northeast horizon, just ahead of the sun. The only bright planet "out of the loop" this month is Jupiter, which will be too near to the sun to be visible through July. [Brightest Planets in July's Night Sky (Video)]

To help you make the most of your stargazing nights in July, we've rounded up the most promising planetary sights to behold with telescopes, binoculars and the unaided eye. To help locate your targets, you can use your clenched fist at arm's length — equal to roughly 10 degrees — to measure off angular distances. The brightest stars in the sky are ranked as first or zero magnitude on the brightness scale used by astronomers. The very brightest objects (Venus, moon and sun) are of negative magnitude.

Here's a look at when to see the brightest planets in the July night sky (note that all skywatching is dependent on your local weather conditions):

July 5: Hovering just above the moon as darkness falls on this Saturday evening is Mars, which shines brightly in the south-southwest sky at dusk, outshone in luster only by the similarly hued star Arcturus (high in the southwest) and bluish Vega (high in the northeast). As the sky darkens further, the nearby blue star Spica becomes prominent about 4 degrees to the lower left. After Mars passes to the north of Spica on July 13, we'll be able to watch the Red Planet withdrawing eastward of the star quite rapidly. July is the last month that Mars will show more than a few traces of surface features in medium-size telescopes on good nights. On July 2, the planet will have receded to 1 astronomical unit (93 million miles or 150 million kilometers) from Earth.

July 7: Saturn appears as a bright yellowish-white "star" shining sedately 1.3 degrees above and to the left of the gibbous moon this evening. Almost everyone remembers his or her first view of Saturn. The magnificent ring system, the banded globe, and the faintly shimmering moons make Saturn an object of exquisite beauty. The rings are currently tilted 21 degrees toward our line of sight, the least this year. To clearly discern them you'll need a telescope with magnifying capabilities of at least 30-power; a 4-inch refractor or 6-inch reflector at 150-power are probably the minimum apertures and magnification suitable for making detailed studies of this planet.

July 12: Mercury arrives at its greatest elongation this morning, 21 degrees west of the sun. Look for it about 45 minutes before sunrise appearing as a bright "star" in the brightening twilight shining about 8 degrees below and to the left of brilliant Venus. Over the next two weeks, Mercury brightens noticeably and pulls slowly away from Venus while moving closer to the sun.

July 13: Mars slides north of Spica this evening, this being the third and final conjunction in a series of three (a "triple conjunction").  Mars previously passed this star on Feb. 3 and March 25, but this conjunction is the closest of the three; planet and star are separated by just 1.3 degrees. The contrast between yellow-orange Mars and bluish Spica is striking.

July 24: Venus, the "morning star," rises at first light and shines low in the east-northeast as dawn brightens. This morning, you’ll also see a delicately thin crescent moon hovering about 4 degrees to its left. In a telescope, Venus is just a tiny, gibbous blob. It has shrunk and become more nearly round in recent months as it has swung far around to the back side of the sun as seen from Earth. In addition, don't forget Mercury. It appears noticeably lower above the east-northeast horizon compared to earlier in the month, but has brightened up to magnitude -1 and is visible about 10 degrees to the lower left of crescent moon.

Also today, Jupiter comes to conjunction with the sun; it's on the far side of the sun during July and can't be seen.

Editor's Note: If you capture an amazing photo of the planets in July's night sky, or any other amazing celestial view, and you'd like to share it with Space.com for a possible story or image gallery, please contact us at: spacephotos@space.com.