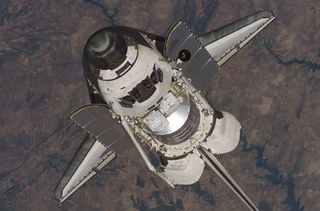 CAPECANAVERAL, Fla. - Six NASA astronauts circlingthe Earth aboard the spaceshuttle Discovery are ready for their Monday landing after a busy missionto the International Space Station (ISS).

"My sensewas that they're getting a little bit excited," Stitch said during a missionstatus briefing. "Tomorrow, they will have their game faces on and they'll beready to execute the deorbit prep and entry."

Lindsey andhis fellow STS-121astronauts have two opportunities to land KSC's Shuttle Landing FacilityMonday, the first at 9:14 a.m. EDT (1314 GMT) and the second at 10:50 a.m. EDT(1250 GMT). The shuttle can also land at KSC, as well as at alternate landingsites in California or New Mexico, on Tuesday and Wednesday, Stitch said.

"If theweather cooperates we'll try to try to get into Kennedy tomorrow," Stitch said.

Rainshowers are the only threat for Discovery's return Monday since they may comewithin a 30-mile (48-kilometer) bubble surrounding NASA's landing facility,Stitch said. Rain can damage the fragile - but vital - heat-resistant tilesthat protect Discovery from searing temperatures of reentry, he added.

Discovery'screw is concluding a 13-daymission to the International Space Station (ISS), where the astronauts delivereda massive load of fresh cargo, one newcrewmember and made repairscritical to the future construction of the orbital laboratory. NASA's STS-121mission is agency's second shuttle test flight since the 2003 Columbia accident.

Discovery'screw spent much of their morning checking their spacecraft's systems to preparethem for a Monday landing. They fired up an auxiliary power unit thought tohave a smallleak during a series of flight control system checks, but found noissue for tomorrow's planned landing.

Lindsey andDiscovery pilot MarkKelly rehearsed their landing procedures with the aid of a handy computerprogram and control stick, which the shuttle commander likened to a video game.The STS-121 crew also stowed items into their final landing locations, NASAsaid.

"For ourheavier missions, the tires that we were using are a little bit marginal for someof our abort cases," Stitch said. "So we've added some additional load bearingcapabilities."

Made byMichelin, Discovery's new tires can handle landings with up to a 20 percentload increase and speeds 10 percent faster than normal parameters.

Whileflight controllers have used a GPS navigation to track space shuttle in orbit,Discovery's landing will be the first time the system is employed during alanding, Stitch said.

The GPSsystem is an addition to Discovery's orbital TACAN navigation system, and willallow flight controllers to gain experience using it for future shuttlemissions.

"It's alittle bit of an improved accuracy than our TACAN system," Stitch said of thenew system.

NASAofficials said TACAN system aboard NASA's Endeavour orbiter has been replacedby the GPS system for its STS-118 flight slated for summer 2007.

"We'regoing to take it out for a spin on the STS-121 mission," Stitch added.