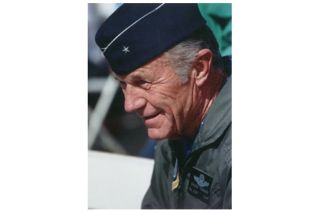 Chuck Yeager continued to act as a flight consultant for the air force until his last flight on October 14, 1997.
(Image: © Air Force Test Center History Office)

Chuck Yeager is an American test pilot who was the first person to break the sound barrier — the point where a speeding object (such as an airplane) passes the speed of sound.

Yeager made his history-setting flight on Oct. 14, 1947 in an airplane he dubbed Glamorous Glennis, after his first wife. The Bell X-1 rocket plane (which today hangs in the Smithsonian Air and Space Museum) passed Mach 1 following a drop from a B-29 airplane.

The monumental "top secret" event was kept classified until 1948, but once it hit the public airwaves, Yeager became a celebrity. He also received a prestigious aviation award called the Collier Trophy, which called his flight the greatest achievement in aviation since the Wright brothers first took flight in 1903.

As of mid-2017, Yeager remains active in public eye, especially on Twitter. Although he has garnered criticism for his negative comments about Britain in the platform, some of his more humorous comments (such as saying sex is better than flying supersonic) have also gone viral.

His last big flight to date took place in 2012, when the then 89-year-old Yeager flew in the back seat of the F-15D to re-enact the 65th anniversary of his record-setting flight. In recent years, Yeager has also been involved in several legal disputes, including with his children.

Yeager had a colorful aviation career long even before breaking the Mach barrier. Born in 1923 in a small town near Hamlin, West Virginia, Yeager grew up working on his father's pickup trucks, according to Yeager's website. His high school graduation in 1941 took place just six months before the United States entered World War II that December.

By that point, Yeager was a young member of the Army Air Corps. He was tapped for flight training in July 1942, and quickly distinguished himself among his peers.

"He had remarkable 20/10 eyesight, tremendous physical coordination, and an uncanny ability to stay focused in stressful situations. Those traits coupled with a competitive streak and his understanding of machinery caught the attention of his instructors," his website stated.

Yeager received his pilot wings in 1943 and served in WWII, flying 64 combat missions for 270 hours in Europe. He was shot down on March 5, 1944, over Bordeaux, France, but with the assistance of French resistance movement the Maquis, Yeager made it back to neutral territory a few weeks later.

Following the war, one of Yeager's assignments as an assistant maintenance officer in the fighter section at the Flight Test Division in Wright Field, Ohio. Yeager's website describes the location as "the center of Army Air Forces R and D [research and development]", and said his main assignment was to fly the fighters being developed there.

His flight skills got him some attention: he was asked to fly in air shows and also took part in service trials at Edwards Air Force Base (then called Muroc Army Air Field). Then in 1947, the young Yeager was picked to try to break the sound barrier.

Yeager's work on Glamorous Glennis began with three glide flights, then powered flights starting Aug. 29. He had trouble keeping the plane straight due to pitch problems, particularly on a flight Oct. 10 where he briefly lost pitch control completely.

Another crew member suggested that Yeager should move the X-1's horizontal tail very slightly to keep his airplane under control. On his next flight, Oct. 14, Yeager tried out the tail idea at 0.83, 0.88 and 0.92 Mach and found the method worked.

Yeager continued his flight testing duties for many years after breaking the sound barrier, including testing Lockheed's XF-104, an aircraft that was capable of going double the speed of sound. But Yeager had a couple of near misses as he tested the aircraft, which was always a risky endeavor as he was among the first to fly these types.

In December 1953, Yeager turned off his Bell X-1A engine as planned at 76,000 feet. The aircraft began to roll and yaw, then quickly fell out of control despite Yeager's attempts to correct the issue. Yeager managed to pull out safely at 25,000 feet — after falling more than 50,000 feet.

Ten years later, Yeager piloted a Lockheed NF-104 aircraft that crashed, but he managed to parachute out safely. "The veteran Air Force pilot suffered burns on his face and neck, apparently from the ignition of pure oxygen in his mask, but otherwise was not injured seriously," the L.A. Times reported at the time. The crash was depicted in both the book and movie versions of "The Right Stuff."

Yeager's last active duty flight was on Feb. 25, 1975, in an F-4C Phantom II, but he remained an active consulting test pilot for decades after that. He made a cameo appearance in the 1983 movie "The Right Stuff," which chronicles the careers of Yeager (portrayed by Sam Shepard) and the early test pilots against the next generation of pilots that flew in the Mercury space program in the 1960s. Yeager played a bartender at Pancho Barnes' Happy Bottom Riding Club.

Glennis Yeager died in 1990 of ovarian cancer, and Yeager married actress Victoria Scott D'Angelo in 2003. The marriage led to a property dispute with some of Yeager's four children, who alleged D'Angelo (more than 40 years Yeager's junior) had married the pilot because of his fortune. In 2008, the California Court of Appeal ruled in Yeager's favor.

Yeager has since been involved in other unrelated litigation, such as a dispute with a Utah company concerning how they use his likeness, and a conflict with a past lawyer concerning legal fees.