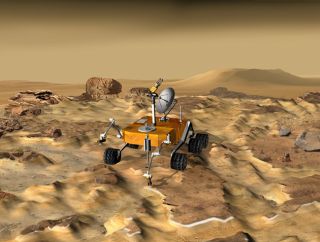 A National Academies study group recommends delaying an Astrobiology Field Laboratory until 2018. Doing so would allow more time to consider the output from prior Mars missions, including the Mars Science Laboratory now being readied for 2009 liftoff.
(Image: © NASA/JPL)

NASA needs to rethink its Mars exploration plans after 2010 given new understandings about the red planet and likely funding levels in the coming years, according to a report just out from a panel of outside experts.

By adding to a reworked mix of future missions-for example, a geophysical/meteorological network as well as a sample return mission-the space agency would garner a greater scientific impact at Mars, the panel concludes. Moreover, the space agency must fortify its ability to analyze the data streaming in from Mars. That research can help flesh out a safe and scientifically productive role for humans on Mars.

NASA's funding of technologies to enable a robust and scientifically rewarding Mars agenda, however, remains a chronic problem, the experts say.

The 15-person ad hoc Mars Architecture Assessment Committee was set up by the Space Studies Board, a research arm of the National Academies. The group's nearly 50-page appraisal of NASA's Mars Architecture 2007-2016, requested by the space agency, was released today.

In a June 30 cover letter attachment to Mary Cleave, Associate Administrator of the Science Mission Directorate at NASA Headquarters, the chair of the assessment, Reta Beebe of New Mexico State University, offered a set of recommendations to NASA, including:

The assessment committee, Beebe wrote to NASA's Cleave, found the space agency's future exploration plans as a whole "not optimized," with more work needed to shore up the architecture's scientific impact.

In the review, future robotic missions are spotlighted.

In particular, NASA was advised to immediately initiate appropriate technology development activities to support Mars missions in the 2013-2016 time slot as well as support the Mars Sample Return mission as soon as possible thereafter.

A robotic sample return mission has the potential to yield samples uniquely capable of tackling a host of scientific objectives, the committee explained. Still, there are issues of cost and technical readiness. That being the case, robotic return to Earth of Mars samples will fall beyond the horizon of the coming decade, the study group said.

"Nevertheless, the committee reaffirms the importance of a mission to return samples of Mars to Earth for study and strongly argues that there is an immediate need for developing relevant technologies and infrastructure to enable the implementation of this mission as soon as possible after 2016."

Advocated by the assessment team was a Mars Long-Lived Lander Network (ML3N) - a grid of science stations that will make coordinated measurements around Mars's globe for at least one martian year. This network would use passive seismometers to explore the structure and activity of Mars.

The review group also flagged "the extraordinary resilience" of the Spirit and Opportunity rovers still at work on the red planet. Success of that Mars machinery "strongly suggests that a prudent, risk-reduction strategy is to use their design as a basis for the proposed Mid Rovers," the committee stated.

Mid Rovers would be geological explorers, dispatched to evaluate the geological context of specific sites and search for organic compounds at targets identified by prior missions. As currently envisaged NASA's goal is to fly two rovers for a cost approximately equal to that of the Mars Science Laboratory mission-now priced at $1.5 billion.

Also in the rover realm, the assessment group suggested delaying the launch of the Astrobiology Field Laboratory until 2018. Doing so would permit time to digest results from the Mars Science Laboratory and other prior missions.

An important component of NASA's Mars architecture is the Mars Scout program. The first of this class NASA mission is the Phoenix Mars lander now being readied for a 2007 sendoff. Balloons, airplanes, and other Mars craft are being advocated under the Scout rubric.

The low-cost, science-focused Scouts are characterized as "wild cards" by the study group. These competitively selected missions have the potential to fill in needs. "However, it must be kept in mind that Scouts must be proposed as 'complete missions' and not as architectural elements."

In looking at NASA's sweeping Vision of Exploration (VSE)-replanting astronauts back on the Moon and dispatching humans to Mars and beyond-the assessment committee noted that a strong, independent architecture will stand alone on its scientific merit and will also contribute significantly to that vision.

"Both the utility of the Mars mission architecture and its value within the VSE and NASA's strategic plan would be strengthened by the addition of a network of meteorological/seismic stations and a sample return mission."

There is desire to create a "seamless relationship" between the robotic science missions and human exploration, but to do so without adversely affecting either program element, the review group observed.