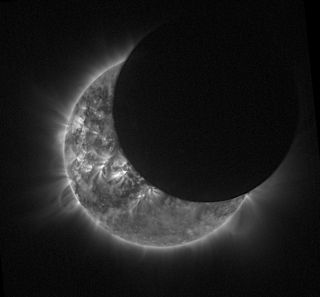 Most of the world missed out on Tuesday's solar eclipse, but a European satellite took full advantage of its ringside seat.

The European Space Agency's Proba-2 spacecraft captured video of the partial solar eclipse Tuesday (April 29), which was visible on Earth primarily from Australia and Indonesia.

While well-placed terrestrial observers witnessed just one prolonged eclipse, Proba-2 saw the moon blot out the sun four separate times over the course of 4 1/2 hours early Tuesday morning as the probe zipped around Earth again and again.

Tuesday's solar eclipse was the first of two that will occur in 2014. The second one, also a partial solar eclipse, will take place on Oct. 23 and will be visible from most of the United States and Canada.

The observations further pad Proba-2's extensive eclipse-watching resume. In November 2013, for example, the spacecraft observed a rare "hybrid" solar eclipse, which shifts from a total eclipse to an annular or "ring of fire" eclipse as seen from different points on the globe. And Proba-2 imaged another solar eclipse a year earlier, in November 2012.

Proba-2 is the second spacecraft in the European Space Agency's PRoject for OnBoard Autonomy line of satellites. The solar-powered probe weighs just 287 lbs. (130 kilograms) and circles Earth in a sun-synchronous orbit that takes it between 435 and 497 miles (700 and 800 kilometers) from the planet's surface.

The small, relatively low-cost Proba-2 launched in 2009 to study the sun and space weather with four different instruments, and to demonstrate a variety of technologies. Last year, ESA officials approved funding for Proba-2 science operations through the end of 2016.

Editor's Note: If you snapped an amazing picture of the April 29 solar eclipse, you can send photos, comments, and your name and location to managing editor Tariq Malik at spacephotos@space.com.