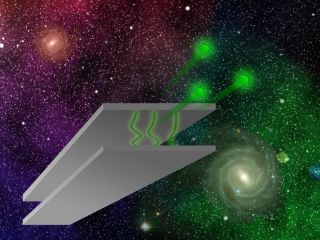 Neutrons bouncing in Earth's gravity are helping to shed light on two of the greatest mysteries in the universe, dark matter and dark energy, researchers say.

Dark matter is an invisible substance thought to make up five-sixths of all matter in the universe. The strength of its gravitational pull apparently helps keep galaxies from spinning apart at the speeds at which they whirl.

Dark energy, on the other hand, is the mysterious stuff that scientists believe is pushing the universe apart, driving up the rate at which the cosmos expands. Investigators suggest dark energy could make up about 70 percent of the universe. [The Strangest Things in Space]

Altogether, the particles known to science make up just about 5 percent of the mass and energy of the universe. What dark matter and dark energy actually are remains a mystery, but physicists have suggested many potential explanations for both.

One candidate for dark matter is a set of particles known as axions. Theoretical physicists originally proposed axions to help solve a puzzle regarding the strong nuclear force, which binds protons and neutrons together into atomic nuclei.

A potential explanation for dark energy involves quintessence theories, named after Aristotle's "quintessence," a fifth element in addition to the four classical elements of air, fire, earth and water. These theories suggest that an unknown field that interacts with matter permeates seemingly empty space. Prominent quintessence candidates include "chameleon fields" that grow weaker around relatively dense objects such as planets and stars, potentially explaining why investigators have not detected these fields.

If new kinds of particles or additional forces of nature exist, researchers might be able to observe them anywhere, including on Earth. Neutrons are perfect for this kind of research; since they carry no electric charge, they are generally influenced only by gravity, and possibly by additional, currently unknown, particles and forces.

Scientists developed an extremely sensitive instrument to monitor the movement of neutrons in Earth's gravitational field. This method relies on neutrons cooled to minus 423 degrees Fahrenheit (minus 253 degrees Celsius), gathered from the strongest continuous source of ultra-cold neutrons in the world at the Institut Laue-Langevin in Grenoble, France.

The neutrons move at speeds of less than about 17.9 mph (28.8 km/h) in a vacuum between two horizontal plates made of a well-polished glass that reflects the particles. The researchers make the "mirrors" vibrate 280 times per second, imparting the neutrons with specific amounts of energy.

"It's like watching a bouncing ball fall and, with a new quantum technique, looking for any effects dark energy or dark matter scenarios could have," said study author Hartmut Abele, an experimental physicist at the Vienna University of Technology.

The researchers measured the effects of gravity on neutrons with a sensitivity 100,000 times greater than in previous experiments. They did not detect any deviations from Newton's well-established law of gravity.

These findings "cut off about half the parameter space" or potential scenarios that scientists have to examine involving chameleon fields, Abele told Space.com. The results also placed significant limits on how much the axion might interact with matter, Abele said.

Improving the sensitivity of these experiments could help confirm whether or not chameleon fields exist. The researchers plan to increase the accuracy of their device by another few orders of magnitude, Abele said.

The scientists detailed their findings online April 16 in the journal Physical Review Letters.