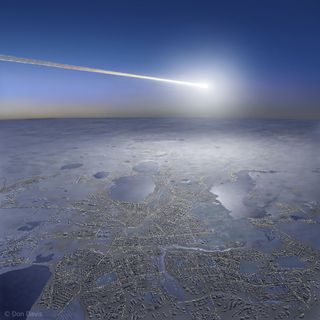 Red tape is making it tougher for researchers to study and characterize asteroid strikes on Earth, which are apparently more common than previously thought, experts say.

The bureaucratic snafu affects the use of U.S. government space assets that help scientists study "airbursts" like the meteor that exploded without warning over Russia last year. At issue is the ability to combine space data with outputs from a global network of seismic, infrasound and hydroacoustic sensors that have been deployed worldwide to provide treaty verification for a nuclear test ban.

In recent years, the IMS has detected shock waves from many airbursts, providing further evidence that asteroid impacts are more frequent than previously thought.

Ideally, matching observations from spacecraft with measurements from CTBTOs infrasound detectors would give scientists more of a heads-up on what's raining down on Earth, experts say.

That document, inked on Jan. 18, 2013, spelled out specifics for the public release of meteor data from sources such as high-flying, secretive U.S. government space sensors.

With that agreement in place, NASA's Near Earth Object (NEO) Observation Program started receiving information on fireball events based on analysis of data collected by U.S. government sensors.

Details of atmospheric meteor explosions, as recorded by U.S. military spacecraft sensors, were posted on a publicly accessible NASA website run by the Jet Propulsion Laboratory (JPL) in Pasadena, Calif.

In fact, the military-civil cooperation was spurred by the details of the February 2013 fireball explosion over Chelyabinsk, Russia — termed a "superbolide" event. The website postings are designed to assist the scientific community's investigation of bolides, or exceptionally bright fireballs.

However, multiple scientists noted that the JPL website had not been updated recently. That presumably meant that there was some sort of delay, as some fairly big events were detected by infrasound in the last year. [Photos: Russian Meteor Explosion of Feb. 15, 2013]

"Because of budget and personnel reductions on our military partner, they ran into workforce issues to accomplish this task," said Lindley Johnson, NEO program executive within the Planetary Science Division of NASA's Science Mission Directorate in Washington, D.C.

"We are already in discussions with them about what it will take to get it restarted," Johnson told Space.com.

Taking personnel off a task of providing useful science data from meteor events could be seen as a cost-saver. But Clark Chapman, asteroid expert at the Southwest Research Institute in Boulder, Colo., questions how much money could actually be saved by these cutbacks.

"There aren't that many events," Chapman told Space.com, "so it is difficult for me to imagine that it would take any major part of one person's time to alert the public and scientific community to the detected bolides."

Chapman said that use of the U.S. military-gleaned data "is a vital resource to the scientific community." That data provides information about the actual rates of such events, which can be tough to gauge.

"But I am not privy to what has to be done on the inside to release this information," Chapman said. He hopes that NASA is successful in encouraging the military "to resume this small but important activity."

Since its inception in the mid-1990s, data from the International Monitoring System of the CTBTO has led to a renaissance in the global detection of low-frequency airwaves (infrasound) from bolides, said Peter Brown, director of the Center for Planetary Science and Exploration at the University of Western Ontario in Canada.

"The value of infrasonic bolide detection is the ability to monitor all parts of the globe, particularly the oceans, for airbursts and provide an estimate of their location and origin time," Brown told Space.com.

With some additional signal processing and comparison with other explosive events in Earth's atmosphere having known source energies, Brown said that CTBTO infrasound airburst energies are now routinely computed and have been found to be robust over many orders of magnitude.

"The current IMS network consists of over 40 infrasound stations, making global monitoring for events as small as 1 kiloton relatively complete," Brown said. "As the network continues to expand and new, automated processing techniques are applied to IMS infrasound data, I expect more airburst events to be identified even sooner after they occur."

Data from the nuclear weapons test warning network, supplied by Brown, will be showcased on Earth Day (April 22) during a B612 Foundation news conference at the Seattle Museum of Flight. A new video will show multiple atomic-bomb-scale asteroid impacts on Earth since 2001.

The nonprofit B612 Foundation is partnering with Ball Aerospace on the infrared Sentinel Space Telescope. From a Venus-like orbit around the sun, Sentinel is designed to find and track asteroids, some of which might hit Earth.

According to former astronaut Ed Lu, CEO of the B612 Foundation, the video shows that asteroid impacts are actually three to 10 times more common than previously thought.

"The fact that none of these asteroid impacts shown in the video was detected in advance is proof that the only thing preventing a catastrophe from a city-killer-sized asteroid is blind luck," Lu said in a statement.

Leonard David has been reporting on the space industry for more than five decades. He is former director of research for the National Commission on Space and is co-author of Buzz Aldrin's new book, "Mission to Mars – My Vision for Space Exploration," published by National Geographic. Follow us @Spacedotcom, Facebook or Google+. Originally published on Space.com.