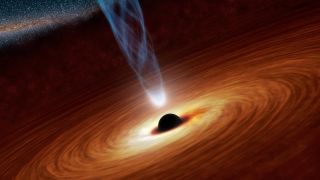 An artist’s impression of a supermassive black hole at the centre surrounded by matter flowing onto the black hole in what is termed an accretion disk. Also shown is an outflowing jet of energetic particles, believed to be powered by the black hole's spin.
(Image: © NASA/JPL-Caltech)

Many people with a basic knowledge of physics know that Einstein developed the theory of relativity, yet few people actually understand what it means.

But author and astrophysicist Jeffrey Bennett believes relativity should be something anyone can understand. He explains what relativity is and how it causes a slew of bizarre effects in his new book, "What is Relativity?" (Columbia University Press, 2014).

In an excerpt from the book's first chapter, Bennett takes readers on a voyage to a black hole, a mysterious realm in which the full strangeness of relativity is on display. [Related: What is Relativity? New Book Offers Simple Explanation]

Chapter 1: Voyage to a Black Hole

Imagine that the sun magically collapsed, retaining the same mass but shrinking in size so much that it became a black hole. What would happen to Earth and the other planets? Ask almost anyone, including elementary school kids, and they’ll tell you confidently that the planets "would be sucked in."

Now imagine that you’re a future interstellar traveler. Suddenly, you discover that a black hole lurks off to your left. What should you do? Again, ask around, and you’ll probably be told to fire up your engines to try to get away, and that you’ll be lucky to avoid being "sucked into oblivion."

But I’ll let you in on a little secret that’s actually important to understanding relativity: Black holes don’t suck. If the sun suddenly became a black hole, Earth would become very cold and dark. However, since we’ve assumed that the black hole will have the same mass as the sun, Earth’s orbit would hardly be affected at all.

As for your future as an interstellar traveler… First of all, you wouldn’t "suddenly" discover a black hole off to your left. We have ways to detect many black holes even from Earth, and if we are someday able to embark on interstellar trips we’ll surely have maps that would alert you to the locations of any black holes along your route. Even in the unlikely event that one wasn’t on your map, the black hole’s gravitational effect on your spacecraft would build gradually as you approached, so there’d still be nothing sudden about it. Second, unless you happened to be aimed almost directly at the black hole, its gravity would simply cause you to swing around it in much the same way that we’ve sent spacecraft (such as the Voyager and New Horizons spacecraft) swinging past Jupiter on trips to the outer solar system.

I realize that this may be very disappointing to some of you. As my middle-school daughter put it, "but it’s cool to think that black holes suck." I was able to placate her only somewhat by pointing out that being cool and "it sucks" don’t usually go together. Still, you’re probably wondering, if black holes don’t suck, what do they do?

The answer has two parts, one mundane and one so utterly amazing that you’ll never again miss your visions of a cosmic vacuum cleaner. The mundane part applies to black holes observed from afar, because at a distance the gravity of a black hole is no different than the gravity of any other object. That’s why turning the sun into a black hole would not affect Earth’s orbit, and why a spacecraft can swing by a black hole just like it swings by Jupiter. The amazing part comes when you begin to approach a black hole closely. There, you’d begin to observe the dramatic distortions of space and time that we can understand only through Einstein’s theory of relativity.

That brings us to the crux of the matter. I’ve begun this book on relativity by talking about black holes because, although almost everyone has heard of them, you cannot actually understand what black holes are unless you first understand the basic ideas discovered by Einstein. One goal of this book is to help you gain that understanding. But I have a second, more important goal in mind as well.

In the process of learning about relativity, you’ll find that your everyday notions of time and space do not accurately reflect the reality of the universe. In essence, you’ll realize that you have grown up with a "common sense" that isn’t quite as sensible as it seems. It’s not your fault; rather, it is a result of the fact that we don’t commonly experience the extreme conditions under which the true nature of time and space is most clearly revealed. Therefore, the real goal of this book is to help you distinguish reality from the fiction that we grow up with, and in the process to consider some of the profound implications of this reality that Einstein was the first to understand.

To get started, let’s take an imaginary voyage to a black hole. This journey will give you an opportunity to experience the two conditions under which Einstein’s ideas have their most dramatic effects: at speeds approaching the speed of light and in the extreme gravity that exists near black holes. For now, we’ll focus only on what you actually observe on your trip, saving the why that lies behind your observations for the chapters that follow.

BUY "What Is Relativity">>>