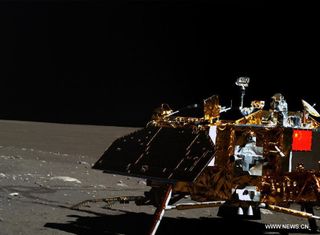 China's first moon rover and lander have entered a third period of "Selene slumber," a shutdown of operations given two weeks of temperature-dropping lunar night.

The Yutu moon rover went into programmed sleep mode on Feb. 22. The large lunar lander slipped into its latest hibernation period the next day. Due to exceedingly low temperatures of the lunar night that drop to minus 292 degrees Fahrenheit (minus 180 degrees Celsius), the rover's electronics and mechanical systems are strained to withstand the thermal plunge.

The overall condition of the now moon-mum Chang'e 3 mission is vague at best. Chinese space officials release little information on the status of the moon mission, which can then be broadcast by state-run media networks. [See photos of China's first moon rover mission]

The Chang'e 3 mission landed on the moon on Dec. 14, touching down on the Mare Imbrium (Sea of Rains) region of the lunar surface. The Chang'e 3 lander dispatched the Yutu robot shortly after to begin a projected three months of exploration at minimum. Pre-launch, the lander was given a one year of life warranty.

However, the six-wheeled Yutu rover ran into technical woes as it entered its second dormancy on the moon on Jan. 25. As that second lunar night fell, concern was raised that the mobile robot was crippled, so much so that it might not "wake up."

The State Administration of Science, Technology and Industry for National Defense (SASTIND) stated that a mechanic control abnormality occurred due to the "complicated lunar surface."

The malady that has struck Yutu isn't totally clear. There is some thought that the invasive lunar dust may have gummed up mechanisms on the rover.

Philip Stooke, an associate geography professor at the University of Western Ontario in Canada, has told Space.com that Yutu's camera mast, also carrying a high-gain antenna, was supposed to fold down into a box on the rover body, and then be covered by one of the panels.

That enclosed space is kept warm by a radioactive heat source. The second solar panel is tilted down and oriented to catch the rays of the rising sun. Stooke's take on the situation is that it appears that the first panel would not close, with the expectation that the cameras might be damaged by the ultra-cold along with other items in need of warmth, too.

Despite its apparent mechanical misery, the Yutu rover regained some sort of operable status on Feb. 12, with SASTIND noting that the reawakening was two days behind schedule.

During the most recent sun-drenched days for the Chinese machinery — a period of time equivalent to about two weeks on Earth — Yutu did perform "fixed point" observations.

According to Yong-Chun Zheng, a scientist at the National Astronomical Observatories within the Chinese Academy of Sciences, the rover ran into trouble in its ability to move about on the surface. "The control structure of the rover can't function as designed." Last month, Yutu went into sleep without protection, he told Space.com.

Thanks to the efforts of engineers, Yutu was awakened. "The instruments on the rover stood up to the challenge of the very low temperature in the lunar night," Yong-Chun said. "The rover can receive command[s] from the ground station. We have also received data from the rover."

Except for some sensitive components, most of the functions of the rover have been recovered, Yong-Chun said. The distance between the lander and the rover is about 100 meters, he said in a Feb. 14 email.

"The lunar and planetary missions are not easy for any country. They always give us joy mingled with surprise," with the anticipation that the Yutu rover can still make new discoveries on the moon, Yong-Chun said.

SASTIND has noted that Yutu's radar, panorama camera and infrared imaging equipment were functioning normally in the last period of lunar day. Still, the control issues that had troubled the rover since January persist, SASTIND added.

The Xinhua news agency said that mechanical control issues that might cripple the vehicle are "still unresolved."

In entering its third chilly period of extended night, the Chang'e 3 lander did so after carrying out observations of celestial bodies and the Earth's plasmasphere using its optical telescope and extreme ultraviolet camera.

How Yutu and the instrument-laden lander withstand their third lunar chill-down and revival will become newsworthy once again in a few weeks' time.

Leonard David has been reporting on the space industry for more than five decades. He is former director of research for the National Commission on Space and is co-author of Buzz Aldrin's new book "Mission to Mars – My Vision for Space Exploration" published by National Geographic. Follow us @Spacedotcom, Facebookand Google+. Original article on Space.com.