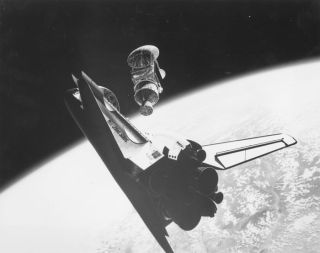 An artist's conception of the Advanced Communication Technology Satellite (ACTS) just after release from the space shuttle's cargo bay in September of 1993.
(Image: © NASA.)

In this historical photo from the U.S. space agency, an artist's concept of the Advanced Communication Technology Satellite (ACTS) shown after release from the space shuttle's cargo bay. ACTS was launched on September 12, 1993 and built by Lockheed Martin Astro-Space.

The unique feature of ACTS is that it was a "switchboard in the sky" in that it incorporates on-board switching and steerable, spot-beam antenna that allow routing of signals to take place on the spacecraft. ACTS technology was cost-effective (when compared to other satellites) and provided more communication capacity than previous satellites.