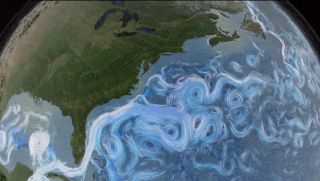 This still image from NASA's "Dynamic Earth" video shows ocean currents off the east coast of North America, as well as prevailing winds. "Dynamic Earth" is a four-minute animation describing the relationship between the sun and Earth's climate and weather.
(Image: © NASA Scientific Visualization Studio)

A NASA video that shows exactly  how profoundly and dramatically the sun influences Earth's climate and weather has won a high-profile international competition.

Narrated by actor Liam Neeson, the NASA video "Dynamic Earth" took first prize in the 2013 International Science and Engineering Visualization Challenge, which is sponsored jointly by the prestigious journal Science and the National Science Foundation. The award was announced online today (Feb. 6) in Science.

The four-minute animation was created by staffers at NASA's Scientific Visualization Studio and their colleagues. It "depicts the vast scale of the sun's influence on the Earth, from the flowing particles of the solar wind and the fury of coronal mass ejections to the winds and currents driven by the solar heating of the atmosphere and ocean," video team member Horace Mitchell, of NASA's Goddard Space Flight Center in Greenbelt, Md., said in a statement. [See All the Visualization Winners]

"Moving through these flows gives the viewer a sense of the grandeur in the order and chaos exhibited by these dynamic systems," Mitchell added.

"Dynamic Earth" is an excerpt from a full-length movie, narrated by actor Liam Neeson, that is playing at more than 60 planetariums around the world, contest organizers said.

The annual visualization challenge, which is in its 11th year, honors people and teams who convey scientific findings to the public via photography, illustration, videos and other visual media. This year, judges screened 227 entries from 12 countries.

"The winners made scientific data beautiful and brought their new ideas to life while, at the same time, immersing the viewer in science," Monica Bradford, executive editor of the journal Science, said in a statement. "The award recognizes this remarkable talent for creating thought-provoking videos and visuals."

The cover of this week's issue of Science features the winner of the competition's photography component: an image called "Invisible Coral Flows." The picture highlights the beauty of reef-building corals, which create flows at the microscale level by waving their tiny hairlike cilia.