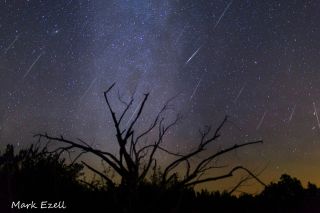 They watch the night silently, three sets of mechanical eyes with their unwavering gaze aimed at the heavens above Mount Hamilton, Fremont Peak and Sunnyvale, Calif., for signs of telltale tiny streaks of light.

The cameras are part of a project to monitor the night sky for meteors, buts of space dust and debris that ignite as dazzling streaks as they hit Earth's upper atmosphere. By tracking meteor showers each night, astronomers hope to find clues to the origins of these space rocks, as well as to help identify potential near-Earth objects.

Meteor showers are produced when dust or particles from comets or asteroids burn up in the atmosphere. The meteor-watching team, led by meteorite expert Peter Jenniskens of the SETI Institute in Mountain View, Calif., observed 42 showers during January and February 2012, 16 of which were new. Only one of them, the Quadrantids in January, has a known parent object — the comet 3200 Phaethon. [5 Amazing Meteor Fireball Videos]

"That leaves us with 41 parent bodies out there that cross Earth's orbit at some point, and we don't know where they are," said study researcher Beth Johnson, a physics student at San Jose State University, who presented the results of the project in January at the annual American Astronomical Society meeting in Washington, D.C.

Most of the parent bodies are comets, some of which lose their ice to become "dead comets," which closely resemble asteroids. These dead comets could potentially become near-Earth objects.

"We know what their orbits should be, and we know where we should look, and we have to let comet hunters start looking in those areas," Johnson told Space.com.

The Cameras for Allsky Meteor Surveillance, or CAMS, project consists of three sets of 20 cameras in California's Bay Area. The cameras record the sky all night, every night. Later, scientists analyze the data and tally the number of meteors.

Most of the meteors are just specks of dust burning up in the atmosphere, but every now and then, a bigger rock comes through and creates an explosive fireball.

In fact, the cameras caught sight of the Sutter's Mill meteorite, the 8-foot (2.4 meters) near-Earth asteroid that blazed to ground over California's Sierra Nevada mountains in April 2012.

The cameras block out the moon and other bright lights, but "clouds are our enemy," Johnson said. Bright, thick clouds just appear black to the cameras, but light, wispy clouds create false positives, Johnson said.

During major meteor showers like the Perseids in August, the cameras catch hundreds of meteors per night. But even without those major showers, meteors streak the sky year-round.

In April, the CAMS project added a spectrograph, which tells scientists about the composition of the meteors the cameras see. And the project is starting up a new branch in New Zealand, which will catalogue meteors in the Southern Hemisphere. Soon, the project will be able to monitor meteor flashes around the globe.