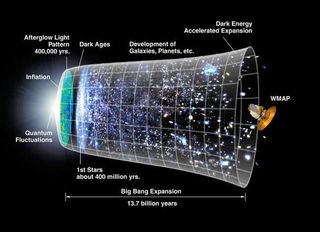 Incomprehensible as it sound, inflation poses that the universe initially expanded far faster than the speed of light and grew from a subatomic size to a golf-ball size almost instantaneously.
(Image: © NASA)

At first, there was nothing — complete and utter emptiness. Zero energy and zero matter.

And then, out of this nothingness, the universe was born. Tiny, but extremely dense and packed with energy. And then, within a miniscule fraction of a second, it rapidly grew in size — inflated — by at least a factor of 10raised to the 25th power.

This theory, known as inflation, is currently the dominant explanation for what happened after the Big Bang and for how the universe came to be the way it is today. But although many scientists now believe that inflation did indeed take place, they still don't know how or why it started, or how it stopped. And so far, there hasn't been any solid experimental evidence for this accelerated expansion.  [8 Baffling Astronomy Mysteries]

Scientists hope that in just a few months they might start to unravel the riddle, when they examine the next set of data from the Planck satellite. Since 2009, this radio telescope, run by the European Space Agency (ESA), has been mapping the oldest light in the universe.

Known as the Cosmic Microwave Background (CMB), this fossil light is often called the Big Bang's afterglow. It is thought to have appeared after the inflationary period, some 380,000 years after the universe was born, when neutral atoms started forming and space became transparent to light.

Supporters of the theory said the Planck results hinted perfectly at how inflation might have worked. Critics, however, argued that the inflation models were simply tweaked to fit the data, without really explaining it.

All Planck data suggests that the universe is "remarkably simple," said astrophysicst Anna Ijjas of Harvard University. The same data, however, only supports inflation models that are highly complicated and, she said, "only work for much more restricted initial conditions."

Scientists already know, both from Planck and earlier observations, that the CMB shows tiny density fluctuations, which then became huge over the next 13.7 billion years, as the universe expanded. [From the Big Bang to Today in 10 Easy Steps]

Since these classical fluctuations appeared right after inflation, that means they were already there when the CMB was created. And it's these density fluctuations that became the seeds of stars and galaxies.

The oscillations found in the CMB provide another pointer toward inflation. When the CMB began to "glow," the quantum fluctuations had already become classical density waves.

The first set of Planck spacecraft results not only confirmed these fluctuations, it also showed that they are correlated over huge distances: all waves with the same wavelength seem to be oscillating in sync with each other.

"This coherence is something that inflation explains very naturally," said Baumann."It is by far the most striking observation we have made. It's very tantalizing."

One of the most startling results of all CMB measurements, though, has been the uniformity of the fossil light's temperature, which varies by less than 0.0003 degrees Celsius.There are only two ways that the universe could have achieved such uniform temperatures, Baumann said.

In a non-inflationary model, there would have to be wild temperature differences between different parts of the universe, which then, over time, would have reached equilibrium, just like various objects in a house reach "room temperature."

However, the universe is too young to explain equilibrium over such large regions of space. Or to put it differently: The universe is larger than the maximal distance (called horizon) at which light or any disturbances in the Big Bang's primordial plasma could have affected each other. So, in a seeming paradox, distant parts of the universe have the same temperature and density, even though they cannot have "contacted" each other. [History and Structure of the Universe (Infographic Gallery)]

In an analogue to the inflation theory, both cups would be "produced by the same coffee machine at the same time, and inflation then takes the coffee cups and separates them faster than the speed of light."

Studying the CMB's extremely faint light has been tricky throughout, but also full of scientific promise. That's because the quantum fluctuations at the start of the universe should also have triggered gravitational waves, elusive and so far theoretical ripples in spacetime predicted by Einstein.

If they were to be found, and found to map to the CMB's fluctuations, they could provide extremely strong support of inflation. "Seeing gravitational waves would be a smoking gun" for the inflation model, said Baumann.

The proof is complex, but it depends on subtle variations in the polarization of the light waves from the CMB. There are two types of polarization variations, called E-mode and B-mode. The latter describe the rotation, or twist, of the polarization, and it is this variation that physicists hope will provide weighty evidence for inflation.

According to Einstein's general theory of relativity, the CMB would show B-mode polarization because of the huge energies involved in the stretching of spacetime during inflation, said Ijjas.

If the CMB's light is indeed twisted that way, inflation would provide an excellent explanation, because "such a high-energy mechanism would shake space-time in a dramatic way, so that we could determine its strength by measuring the amplitude of gravitational waves it produced," said Ijjas.

Baumann says that gravitational waves may even persuade scientists who are working on alternatives to inflation to accept the model.

"Seeing B-modes would give us a lot of confidence that inflation happened and that we all came from quantum fluctuations."

Ijjas agreed. "The main tendency has been [so far] to design complicated inflationary models with many parameters that match the Planck data," she said. "Detecting or not detecting the gravitational wave signal is a key test that can either improve or harm the case for inflation."