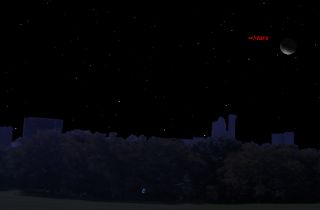 This sky map shows the location of Mars and the moon at 3 a.m. local time in the pre-dawn sky of Nov. 27, 2013 as seen from mid-northern latitudes.
(Image: © Starry Night Software)

Face east at around 2 a.m. Wednesday morning (Nov. 27) and you’ll see a fat waning crescent moon about 10 degrees above the horizon, unless there’s a tree or house obstructing the view.

Once you’ve sighted the moon (10 degrees is about the width of your clenched fist held at arm’s length).   look to its immediate left and you’ll see what appears to be a fairly bright "star" shining with a yellow-orange tinge.

That’s not a star, however, but a planet — the mysterious Mars. [Best Stargazing Events of November 2013 (Sky Map Gallery)]

Admittedly, Mars hardly inspires awe when it comes up nearly due east around 1 a.m. local time these late November mornings, then climbs high into the southeast sky just before dawn. The Red Planet currently shines at magnitude 1.3, a brightness that would rank it near the bottom of the listing of the 21 most luminous stars in the sky.  A month from now, however, Mars will have brightened about a half magnitude — a sure sign of much greater things to come this winter and spring.

The Red Planet is still too small to show any surface features in most telescopes even when well up in the southeast. So to observe it well, you must have access to a large telescope (at least 8 inches, or 20 centimeters, of aperture) and utilize a high-power eyepiece of at least 400-power.

Even with such an instrument, good viewing conditions are essential. Spring is well advanced in the Martian northern hemisphere, and if you can get a night during which the image doesn’t quiver too much, you may notice the north pole with its shrunken ice cap tipped 23 degrees toward Earth.

On Monday (Nov. 25), Mars crossed over from the constellation Leo into the boundaries of Virgo. It will remain there until early August of next year, and in the process it will engage Virgo’s brightest star, Spica, in an unusual triple conjunction, the first of these pairings taking place in early February.

Currently, Mars is 157.8 million miles (253.9 million km) from Earth. By April 14 of next year, that distance will have been reduced to 57.4 million miles (92.4 million km), and its brightness will have increased 13-fold. The Red Planet will then be a match for Sirius, the brightest star in the sky.

So when you see that modestly bright object near the moon early Wednesday morning, just remember: As far as Mars is concerned, there are better times ahead!

Editor's note: If you snap a photo of Mars, the moon or any other amazing night sky view and you'd like to share it for a possible story or image gallery, please contact managing editor Tariq Malik at spacephotos@space.com.