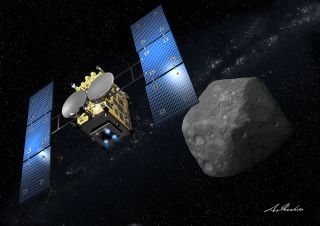 An artist's illustration of Japan's Hayabusa2 spacecraft arriving at asteroid 1999 JU3 in 2018. The mission launches in 2014 to collect samples of the asteroid and return them to Earth.
(Image: © JAXA/Akihiro Ikeshita)

A "space cannon" scheduled to fire a metal bullet at an asteroid in 2018 has been successfully tested, according to press reports. A spokesman with the Japan Aerospace Exploration Agency's (JAXA) told AFP that the Hayabusa2 project, set to carry the cannon into space, "is progressing as planned."

Hayabusa2 mission is expected to launch in 2014 and is designed arrive at Asteroid 1999 JU3 four years later. The spacecraft's cannon will drift toward the surface of the asteroid, blasting the space rock to create crater where Hayabusa2 will collect samples from the interior of the asteroid, eventually returning them to Earth by about 2020. [Photos of Japan's Hayabusa-2 Asteroid-Sampling Mission]

The Hayabusa2 project follows in the line of another probe of the same name. The original Hayabusa mission collected dust from an asteroid, returning to Earth in 2010, but now JAXA scientists are hoping to use the space cannon to get a better look at the interior of a space rock.