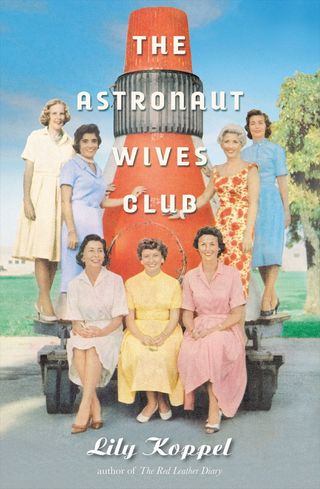 "The Astronaut Wives Club" by Lily Koppel is being adapted for a limited drama TV series by ABC Studios.
(Image: © Hachette Book Group)

A best-selling book about the women behind America's original astronauts is now being adapted for television by the co-creator of "Gossip Girl."

ABC has given the "go" for producer Stephanie Savage to pen a limited drama series based on author Lily Koppel's "The Astronaut Wives Club," the entertainment news site Deadline Hollywood broke Wednesday (Oct. 16). The TV show is reportedly being fast-tracked, possibly for summer 2014.

Characterized by the New York Daily News as "'Mad Men' meets 'The Right Stuff' or 'The Real Housewives of Cape Canaveral,'" Koppel's narrative follows the true-to-life story of the wives of John Glenn, the late Scott Carpenter and James Lovell, among others, through their struggles to stay grounded while their husbands launched into outer space.

"What I wanted to convey is they were almost in their own crazy NASA space program," Koppel told SPACE.com. "That they had this equally hard role of keeping the home fires burning bright and projecting this perfect American family image to the world."

"Everything was moving so fast and everyone was trying to get to the moon, and the wives were sort of in it as much as their husbands," Koppel added. "If he couldn't make it home for two or three weekends in a row because he was training, it was just part of the sacrifice. But then there were incredible things like round-the-world tours after your husband came back, and meeting heads of state and feeling like you were higher-than-high society and royalty. Your husband had gone where none of these international jet setters could even dream of going."

Praised by the Washington Post for "chronicling a cultural moment" and pronounced by the Chicago Tribune as "an electric fireside chat with the women who put men on the moon," Koppel's "Astronaut Wives Club" spent four weeks on The New York Times Best Sellers list (reaching as high as number 9). A paperback edition is slated for release in June 2014.

The early space race is the fodder for at least two other TV series now in development.

The writers behind AMC's critically acclaimed "Mad Men" were reported in April to be working on "Cocoa Beach," a potential series focusing on the U.S. space program of the 1960s and the journalists who covered it.

Then, in June, Primeridian Entertainment hired "Star Trek II: The Wrath of Khan" screenwriter and director Nicholas Meyer to pen a pilot episode and treatment for a TV series about "the tense competition between the U.S. and USSR superpowers at the height of the Cold War," beginning with the two nations' efforts to develop rockets in the aftermath of World War II.