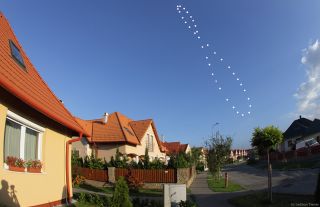 More than 30 images were taken to make this composite photo of the sun's movement across the sky in 2011. The images shows what scientists call the analemma, the movement of the sun in the sky over the course of a year. The background image was also taken separately without a solar filter.
(Image: © Tamas Ladanyi / astrophoto.hu / twanight.org)

Today is equinox day on Earth, with the seasons changing from summer to fall in the Northern Hemisphere as winter shifts into spring in the South, all thanks to our planet's orbit, tilt and the sun. You can witness the celestial event live online.

The exact time that Earth reaches the equinox today (Sept. 22) is 4:44 p.m. EDT (2044 GMT). During an equinox, the length of the day and night are roughly equal. In fact, the term "equinox" is Latin for "equal night."

You can watch the equinox live in a free webcast here courtesy of the online Slooh Space Camera. The webcast will begin at 4:30 p.m. EDT (2030 GMT) and continue through the equinox.

"At that moment, the sun will hover directly above the equator, and numerous celestial oddities will occur — even if most people simply know it as 'the start of fall,'" Slooh officials said. "Slooh will have a team of astronomers and production personnel on hand live at Canary Islands, with live views from their observatory site, to discuss the myths and realities of the equinox." [Earth's Season-Changing Equinoxes & Solstices Explained (Infographic)]

Warning: Never stare directly at the sun through binoculars, telescopes or the unaided eye without proper protection. Serious eye damage can result. Amateur and professional astronomers use special solar filters to safely view the sun.

Equinoxes occur when the Earth daily spin, its 23.4-degree tilt and its orbit around the sun intersect at a point in which the sun appears to cross the celestial equator — an imaginary line in the sky in the same plane as Earth's equator. It is the Earth's tilt that makes the sun's path across the sky to appear to move at an angle to the celestial equator when viewed from the surface.

But twice each year, there is an equinox. Around March 21, the sun appears to cross this lie moving south to north, marking the end of northern winter. Today (Sept. 22), the sun is making the reverse trip, bringing spring to the Southern Hemisphere as autumn begins in the North.

When viewed over time, the sun's path across the sky resembles a figure-eight shape, which astronomers call an "analemma." Some amateur astronomers have safely photographed the sun during to capture time-lapse views of the analemma each year.

Over the next three months, the sun will continue its southward pass until Dec. 21, when it arrives at the southernmost point, known as the "solstice." During that time, the days in the Northern Hemisphere will get shorter as the nights get longer, while the reverse will occur in the South.

After the Dec. 21 solstice, the sun will once more begin heading north, continuing the cycle of seasons that people on Earth see every year.

Today's Earth equinox webcast by the Slooh Space Camera can also be seen live on the Slooh website here, as well as the Slooh iPad app.