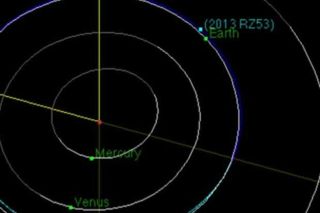 A small asteroid first discovered last week will whiz by Earth today (Sept. 18), zipping closer than the orbit of the moon.

The diminutive space rock, named 2013 RZ53, poses no threat to Earth. At just 3 to 10 feet (1 to 3 meters) in diameter, the asteroid would burn up in Earth's atmosphere if it got on a collision course with the planet, scientists say.

2013 RZ53 will not strike Earth on this pass, however. The asteroid will miss the planet by more than 148,000 miles (230,800 kilometers) when it makes its closest approach today at 6:20 p.m. EDT (2220 GMT), according to data collected by the Minor Planet Center, a Massachusetts-based clearinghouse for information about comets and asteroids. [Potentially Dangerous Asteroids (Images)]

Scientists working with the Mount Lemmon Survey at the University of Arizona discovered 2013 RZ53 on Friday (Sept. 13), and the space rock was observed 34 times through Monday (Sept. 16), according to the Minor Planet Center. Using information gleaned from those observations, researchers put together an animation of 2013 RZ53's path through the solar system.

The Mount Lemmon Survey is part of the Catalina Sky Survey, a NASA-sponsored program that looks out for and tracks potentially hazardous asteroids.

Researchers think that 2013 RZ53 is a member of the Apollo family of near-Earth asteroids. The meteor that exploded over the Russian city of Chelyabinsk in February is suspected to be part of this group. The Russian meteor was much larger than 2013 RZ53, at an estimated 56 to 66 feet wide (17 to 20 m).

A telescope in Hawaii discovered the 10,000th near-Earth object earlier this year, but there are still many more out there to detect and track. NASA scientists have found more than 90 percent of the mountain-sized near-Earth asteroids, behemoths larger than 0.6 miles (1 km) that could cause problems on a global scale if they were to impact the planet.

But just 30 percent of the roughly 15,000 near-Earth asteroids that are 460 feet (140 m) wide have been catalogued, and less than 1 percent of the more than 1 million objects that are about 100 feet (30 m) in diameter have been found, NASA estimates