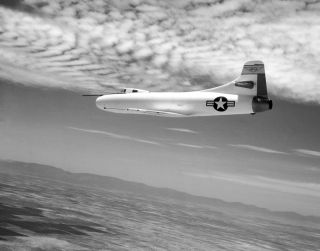 In this historical photo from the U.S. space agency, even with partial cloud cover the white aircraft is easy to see. This is a 1952 NACA High-Speed Flight Research Station inflight photograph of the Douglas D-558-1 #3 Skystreak.

Conceived in 1945, the D558-1 Skystreak was designed by the Douglas Aircraft Company for the U.S. Navy Bureau of Aeronautics, in conjunction with the National Advisory Committee for Aeronautics (NACA). The Skystreaks were turojet powered aircraft that took off from the ground under their own power and had straight wings and tails.

Much of the research performed by the D-558-1 Skystreaks was quickly overshadowed in the popular media by Chuck Yeager and the X-1 rocketplane. But the Skystreak performed an important role in aeronautical research by flying for extended periods of time at transonic speeds, which freed the X-1 to fly for limited periods at supersonic speeds.