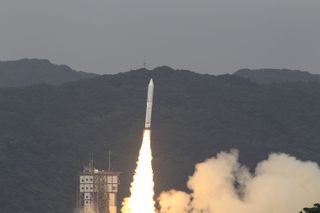 Japan's brand-new Epsilon rocket soared into space Saturday (Sept. 14) in a debut launch that carried a novel satellite into orbit to gaze at Venus, Mars and Jupiter.

The three-stage Epsilon rocket launched into orbit at 2 p.m. Japan Standard Time from the Uchinoura Space Center in southern Japan after a three-week delay due to a technical glitch. The rocket is designed to lower the cost of space launches by using automated systems to perform its own health checks instead of relying on human operators.

"The satellite is currently in good health," JAXA officials said in a statement. The satellite separated from the Epsilon rocket about 61 minutes after liftoff.

The SPRINT-A satellite, short for the Spectroscopic Planet Observatory for Recognition of Interaction of Atmosphere, will observe the atmospheres of Jupiter, Venus and Mars in ultraviolet light. The satellite weighs 771 pounds (350 kilograms) and is expected to spend one year on its primary mission.

Japan's Epsilon rocket is a 91-ton solid-fueled booster that stands 78 feet (24 meters) tall and can launch satellite weighing up to 2,646 pounds (1,200 kilograms) into low-Earth orbit.

The rocket's first stage uses a solid rocket motor based on the boosters used on Japan's liquid-fueled H-IIA launch vehicle, while the second and third stages are based on Japan's M-V rocket, which was retired in 2006. JAXA officials have said they estimated Epsilon's first flight to cost 3.8 billion yen ($38.5 million) – almost half the 7.5 billion yen ($76 million) cost for the M-V rocket.

"We would like to express our profound appreciation for the cooperation and support of all related personnel and organizations that helped contribute to the launch of the Epsilon-1," JAXA officials said.

The SPRINT-A satellite was renamed Hisaki after reaching orbit, and its name has a double meaning. First, Hisaki is the name of a cape at the tip of the Tsushiro Peninsula in the Uchinoura area and resembles the satellite's shape, JAXA officials said. The name is also a combination of "saki" (Japanese for "beyond") and "Hi" (the "sun"), because the spacecraft's targets are "beyond the sun," they added.

Editor's Note: This story was updated Sunday, Sept. 15, to correct the metric height of the Epsilon rocket, with is nearly 24 meters tall.