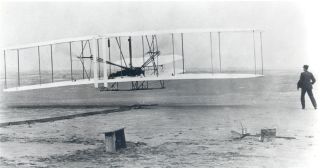 On December 17, 1903, at Kitty Hawk, North Carolina, this airplane, created by the Wright Brothers, arose for a few seconds to make the first powered, heavier-than-air controlled flight in history.
(Image: © NASA.)

In this historical photo from the U.S. space agency, on December 17, 1903, at 10:30 am at Kitty Hawk, North Carolina, this airplane arose for a few seconds to make the first powered, heavier-than-air controlled flight in history. The first flight lasted 12 seconds and flew a distance of 120 feet.

Orville Wright piloted the historic flight while his brother, Wilbur, observed. The brothers took three other flights that day, each flight lasting longer than the other with the final flight going a distance of 852 feet in 59 seconds. This flight was the culmination of a number of years of research on gliders.

Orville and Wilbur Wright's curiosity with flight began in 1878 when their father, Milton, gave them a rubber band powered toy helicopter. Although they were never formally educated, the self-taught engineers constantly experimented with kites and gliders. Bicycle shop owners by occupation, the brothers spent years designing, testing and redesigning their gliders and planes.

After the successful flights of December 17, 1903, Orville and Wilbur continued to perfect their plane. In 1909 the Army Signal Corps purchased a Wright Flyer, creating the first military airplane. Although Wilbur passed away May 30, 1912, from typhoid fever, Orville remained an active promoter of aviation until his death on January 30, 1948.

The Air Age truly began with that historic flight on December 17, 1903. In 1908 the Wright Brothers designed the first military aircraft for the Army Signal Corps. Seven years later, in 1915, the National Advisory Committee for Aeronautics (NACA) became the nations leading aviation research organization, of which Orville was a member for 28 years.

As the airplane became more aerodynamic and technically advanced, its uses expanded into many different directions. Military aircraft played significant roles in both World War I and World War II. The airplane made worldwide travel and exploration possible. Spaceflight would never have been realized without the pioneering achievements of the Wright Brothers.