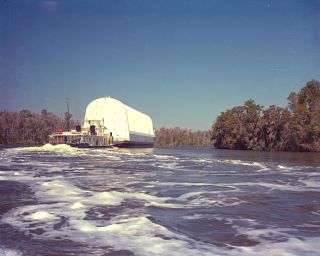 The free world's largest rocket booster is being pushed up Pearl River to a Mississippi testing facility.
(Image: © NASA.)

In this historical photo from the U.S. space agency, a barge is pushed on Pearl River. During the early 1700's French settlers once cautiously sailed up the beautiful Pearl River in Hancock County looking for a New World home. Later, swashbuckling pirates took refuge in this historic stream in South Mississippi after raiding merchant ships.

In this 1966 picture, a different cargo leaves a wake in the blue waters en route to National Aeronautics and Space Administration's Mississippi Test Facility. The huge barge being pushed above contains the free world's largest rocket booster, on its way to the national rocket testing facility for extensive captive firings. Later versions of this huge rocket, first stage of the Apollo/Saturn V, will boost the first Americans to the Moon.