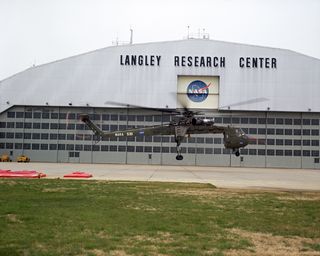 The Sikorsky S-64 Skycrane helicopter was retired from military service in the 1970s.
(Image: © NASA.)

In this historical photo from the U.S. space agency, the Sikorsky S-64 Skycrane helicopter, which saw service with the U.S.Army as the CH-54 Tarhe, flew at Langley in its later version, the CH-54B. The "Crane," seen here in March of 1972, was used in studies into the handling of large helicopters, and as such sported various loads attached to the airframe. The Army retired its Skycranes in the 1970s and they were completely removed from military service in the 1980s. Ex-military Skycranes entered commercial service, where they are used in various heavy-lift roles, including the lumber industry. The U.S. military preferred a heavy-lift aircraft that also had a cabin capable of carrying cargo and troops.