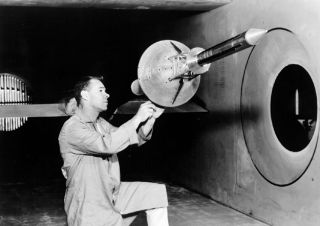 In this historical photo from the U.S. space agency, a technician mounts a model of the Apollo Launch Escape System (LES) in the Unitary Wind Tunnel at the NASA Ames Research Center, Moffett Field, California. The LES was a tower like structure consisting of four solid propellent motors mounted atop the Apollo Command Module.

In the event of a contingency, (booster failure or some other imminent failure) the LES would be commanded to ignite, subsequently removing the Command Module from the Saturn launch vehicle.