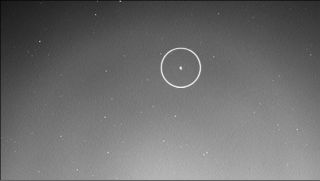 One of Mars' two tiny moons climbs high into the Red Planet sky in an otherworldly new video recorded by NASA's Curiosity rover.

The video, which stitches together 86 frames snapped by Curiosity's navigation camera, shows the Mars moon Phobos rising shortly after sunset on June 28, 2013.

"You asked for the moon. Here it is! See footage from my Navcam of Mars' moon Phobos rising," NASA officials wrote on behalf of the rover via the Curiosity Twitter feed Monday (July 1). [See Curiosity's new video of the Martian moonrise]

Though the video lasts just 32 seconds, the action it depicts actually took place over the course of 27 minutes. The large, diffuse ring visible in the video is an artifact caused by the scattering of light inside the camera, officials said.

Phobos is just 14 miles (22 kilometers) wide on average, while Mars' other moon, Deimos, is even smaller. Many scientists think both Phobos and Deimos are former asteroids captured by the Red Planet's gravity long ago.

Curiosity landed inside Mars' huge Gale Crater last August, kicking off a planned two-year surface mission to determine if the Red Planet could ever have supported microbial life.

The rover has already checked off this big milestone; in March, mission scientists announced that a site called Yellowknife Bay was indeed habitable billions of years ago.

Curiosity has yet to venture far from its landing site, but that will change soon. The rover is getting set to start heading for its ultimate destination, the base of the mysterious Mount Sharp, which rises 3.4 miles (5.5 kilometers) into the sky from Gale Crater's center.

Mount Sharp's many layers hold a history of Mars' changing environmental conditions over time, and Curiosity scientists want the 1-ton robot to read this history like a book as it climbs up through the mountain's lower reaches.

The foothills of Mount Sharp lie about 5 miles (8 kilometers) from Curiosity's current location as the crow flies. The rover is wrapping up its last activities near its landing site and could begin the roughly year-long drive any day now.

The new video does not mark Curiosity's first observations of Phobos. In September of last year — just five weeks after touching down — the rover used its workhorse MastCam camera to photograph the moon as it crossed the face of the sun, taking a tiny bite out of the star.

Such eclipse photos can help refine scientists' understanding of the orbits and orbital evolution of Phobos and Deimos, researchers have said. And the gee-whiz factor may be a motivator as well, especially since these images are not terribly difficult for the Curiosity rover to collect.