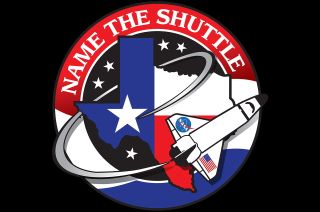 HOUSTON — Florida has Atlantis, California is home to Endeavour, Virginia displays Discovery and New York has Enterprise. Texas has a space shuttle, too — a full-scale, high-fidelity mockup of the NASA winged vehicles — but what the Lone Star State's orbiter doesn't have is a name.

Beginning Thursday (July 4), Space Center Houston will seek Texans' help to correct that by launching its "Name the Shuttle" contest. The official visitor center for NASA's Johnson Space Center, Space Center Houston is looking for an "original name that symbolizes the spirit of Texas and its unique characteristics of independence, optimism and can-do attitude."

The shuttle mockup, which was named "Explorer" during its 18 years on display at NASA's Kennedy Space Center Visitor Complex in Florida, arrived by barge in Houston in June 2012. The 123-foot-long (37 meter) replica has been exhibited outside Space Center Houston for the past year. [NASA's Space Shuttles: Where Are They Now?]

Before sailing to Texas, the "Explorer" name was removed from the shuttle's side, leaving the model without a name — until now.

The "Name the Shuttle" contest, which starts at 12 pm CDT (1700 GMT) on Independence Day, will run through Sept. 2. Beginning Thursday, Texas residents can visit the new website www.NameTheShuttle.com for contest details and to submit their suggestions for what to name the orbiter.

Rise of the [Insert Name Here]

The title to the modified 747 jumbo jet was transferred to the visitor center by the space agency in May, setting in motion Space Center Houston's $12 million plan to pair the replica shuttle with the historic orbiter-ferrying aircraft.

The jetliner, which is currently waiting at nearby Ellington Field, will be partially disassembled and cut into segments before being trucked to Space Center Houston by the end of the year. Work will then begin to reassemble the aircraft and hoist the mockup shuttle atop the same mounts that were used to fly the space-flown orbiters between NASA's facilities and ultimately, to their museum homes.

The six-story-tall "The Shuttle and 747 Carrier" attraction is slated to open to the public in 2015. It will be the only place in the world where visitors will be able to go inside a real Shuttle Carrier Aircraft, as well as the orbiter mockup mounted atop it.

When NASA first set about to name its fleet of orbiters, its committee recommended 15 names that had a "significant relationship to the heritage of the United States or to the shuttle's mission of exploration." Among these monikers were names were "Adventurer," "Prospector," "Freedom" and "Liberty."

On Feb. 1, 1979, NASA announced it would name its first four shuttles to launch into space after sea vessels used in world exploration.

Columbia was named for Captain Robert Gray's sloop that first explored the Columbia River in the Pacific Northwest in 1792 (Gray named the river after his vessel). Challenger was named after the British ship that led a global marine research expedition undertaken from 1872 through 1876.

Discovery took its name from four British ships, but was primarily the namesake of the HMS Discovery, which was one of the ships helmed by Captain James Cook. Atlantis was named after the two-masted primary research vessel for the Woods Hole Oceanographic Institution from 1930 to 1966.

NASA's first shuttle, the prototype orbiter Enterprise, was originally to be named "Constitution" after the U.S. Navy's three-masted heavy frigate. Instead, a fan-led letter writing campaign resulted in the test craft being named after the fictional flagship in the television series "Star Trek."

Enterprise was also the name of a sailing ship, which took part in an arctic expedition between 1851 and 1854.