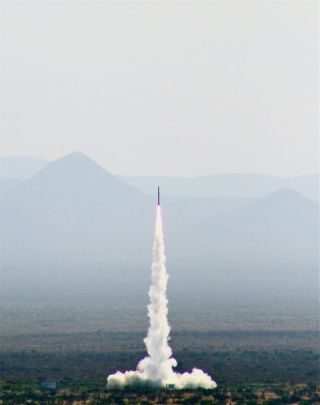 TRUTH OR CONSEQUENCES, N.M. — A rocket's roar swamped applause here as an Up Aerospace SpaceLoft suborbital booster shot government, commercial and student science experiments — plus human ashes — to the edge of space.

"Missile away, missile away," said a launch officer, with the rocket leaving a cloud of dust as it punched its way through the atmosphere after lifting off from Spaceport America, billed as the world's first purpose-built commercial spaceport. After a short while, a parachute-recovery system brought the suborbital SpaceLoft rocket and its payload safely back to terra firma.

Onboard the rocket that flew into space and then nosedived back to Earth were payloads from customers that included the Federal Aviation Administration, the Department of Defense, NASA, Celestis Inc. and a number of middle schools, high schools and universities around New Mexico.

"Today's mission was a total success," said Jerry Larson, president of UP Aerospace Inc., based in Highlands Ranch, Colo. "We reached a new height at the spaceport at 390,450 feet [74 miles, or 119 kilometers]. The payloads re-entered and landed on target at White Sands."

The suborbital rocket sped to Mach 5 (five times the speed of sound at approximately 3,800 mph, or 6,100 kph). Within two hours of their journey to space, the experiments were recovered and returned via helicopter to eagerly awaiting payload customers, along with students and teachers.

Larson saluted the mission's success and said he had a very happy NASA customer.

"It made for a really good day," Larson told SPACE.com, noting that the firm's next launch for NASA is set for Oct. 9. and more flights are in the works. UP Aerospace has conducted launches from Spaceport America since 2006. [Photos: Take a Tour of Spaceport America]

With this latest launch, the company has carried out a total of 11 launch campaigns from the spaceport, of which seven were SpaceLoft launch vehicles and four were additional launches of proprietary systems for Lockheed Martin and Moog-FTS, a space research and manufacturing technology group.

"We are rockin' this program," said Patricia Hynes, director of the New Mexico Space Grant Consortium. "The rocket's back from space."

Including projects from this week's successful flight, the student launch program has now sent a total of 76 student experiments to space, Hynes said.

The program promotes science, technology, engineering and mathematics programs for students. Hynes said. The launch, along with the yearlong education program in which students create and design the experiments, was sponsored by NASA through its Summer of Innovation Program.

Among the student experiments, algae, triops and yeast were sent aloft to determine if they can survive a launch into space and still be usable. Other research investigated stresses on young bean plants as well as on student-created structures of different sizes, called flexible form factors, to find out if each can survive a space launch.

"This was my first trip to Spaceport America. I really like what I see here," said L. K. Kubendran, NASA Flight Opportunities program executive. "In fact, we hope to have more launches at the spaceport in the future."

"Our goal is to fly more payloads," Kubendran added. "On one side we want to mature technology for spaceflight in the future. On the other side we also want to encourage and foster industry so that, in the end, we'll have a lot more companies flying commercial spaceflights. NASA would be one of the customers, not the only customer."

Also tucked inside the rocket, alongside the experiments, were chili seeds, poker chips, fabric for yoga pants and a few yoga mantras. The flight also flew the cremated remains of individuals, a commercial service provided by Celestis Inc. of Houston.

Celestis flight capsules contained the ashes of such people as Judd Nordyke, a former mayor of nearby Hatch and an early Spaceport America backer; Candy Johnson, an American dancer who took part in several of the Frankie Avalon "Beach Party" films of the 1960s; and Maria Swan, who was crowned Miss World Argentina in 1967 and became Argentina's first female airline pilot. The remains returned to Earth with the other payloads and were returned to relatives.

Celestis has flown ashes to space on numerous missions before.

"It's getting routine, which is, of course, the way it's supposed to be," said Charles Chafer, chief executive officer of Celestis. "The launch crew was on top of everything. The families were thrilled. It was just a great day. This one was about as smooth as you can do it. With our payload being recovered, we'll turn it back to 36 happy families."

Celestis also offers missions to Earth orbit, to the moon, and into deep space.

Chafer said he is excited to be part of another NASA-sponsored flight, the Sunjammer mission to fly the world's largest solar sail — a spacecraft powered by solar energy. That flight is on the books for a projected November 2014 launch.

The huge sail measures more than 13,000 square feet (1,200 square meters) in area and will journey 1.9 million miles (3 million kilometers) toward the sun. Sunjammer is a NASA-funded technology demonstration mission designed to test the effectiveness of solar sails for space propulsion applications, and is now being constructed by L'Garde Inc. of Tustin, Calif.

Celestis flight capsules and modules will be carried by Sunjammer on its voyage through deep space.

"It's our first Voyager deep-space service," Chafer said. Already part of that payload has been reserved for the ashes of "Star Trek" creator Gene Roddenberry and his wife, Majel Barrett-Roddenberry.

Leonard David has been reporting on the space industry for more than five decades. He is former director of research for the National Commission on Space and is co-author of Buzz Aldrin's new book "Mission to Mars – My Vision for Space Exploration" published by National Geographic. Follow SPACE.com on Twitter @Spacedotcom. We're also on Facebook & Google+. Original article on SPACE.com.