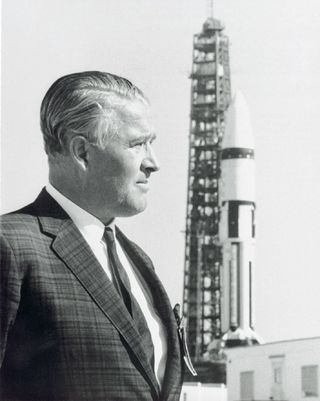 In this historical photo from the U.S. space agency, Dr. Wernher von Braun stands in front of a Saturn IB launch vehicle at Kennedy Space Flight Center on Jan. 22, 1968.

Under von Braun's direction, MSFC developed the Mercury-Redstone, which put the first American in space; and later the Saturn rockets, Saturn I, Saturn IB, and Saturn V. The Saturn V launch vehicle put the first human on the surface of the Moon, and a modified Saturn V vehicle placed Skylab, the first United States' experimental space station, into Earth orbit.