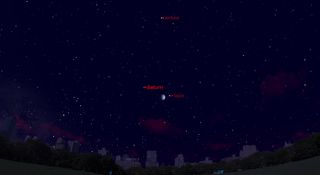 This sky map for shows the location of Saturn, Spica and Arcturus in the night sky for June 18, 2013. The trio form a cosmic triangle in the northern summer months.
(Image: © Starry Night Software)

If you're outside soon after nightfall this week — say around 10 p.m. your local time — you may notice a large and slender triangle high in the southern sky, a celestial geometry display of two stars and the brilliant ringed planet Saturn.

With the official start of summer in the Northern Hemisphere right around the corner, you might think that you are looking at the famous Summer Triangle. But no, that particular pattern of three bright stars is only now emerging into view, low in the east-northeast.

So what is this other eye-catching triangle of three bright stars? It appears in the night sky as a triangle tipped to the left, with the vertex poised high above the base. The triangle itself seems to be pointing toward the point directly overhead (called the zenith). [Gallery: Amazing June Night Sky Photos]

The Saturn triangle will appear to alter its shape in the weeks and months to come.

The planet in question is Saturn and it appears to glow a sedate yellow-white as one of the two "stars" in the base of the triangle. The other object is the bluish star Spica, in the constellation Virgo; Spica is on the right while Saturn is on the left. Saturn's rings, visible in any telescope magnifying at least 30-power, are currently tilted 17.2 degrees, just about the smallest for this year. In the course of the next four years the rings will gradually “open out,” eventually reaching a maximum tilt toward Earth in October 2017.

The third star in the triangle is the brilliant yellow-orange Arcturus in the constellation, Boötes. The triangle will remain in view until around 2 a.m. local time. By then, Saturn and Spica will be low on the west-southwest horizon and will soon set. Arcturus will remain in view, however, until the break of dawn.

A triangle in flux

As we noted earlier, thanks to the fact that a planet is part of this triangle configuration, it's not going to remain this way for long. On July 9, Saturn will seem to come to a halt against the background stars as it's retrograde or "backwards motion" comes to an end.

Since late February, Saturn has been plodding slowly to the west, but in early July it will reverse course and start moving to the east away from Spica. That means that the base of the triangle will be getting larger and the triangle itself will appear to get wider as the summer progresses.

By mid-September, Saturn and Spica will be getting too low in the western evening sky and too deeply immersed in the evening twilight to be seen. Also by that time, Saturn will have a new companion — brilliant Venus.

When Saturn and Spica again become visible, it will be late November, low in the east-southeast before sunrise and the triangle will appear much wider. Saturn will also be engaged in a very close conjunction with Mercury during that speedy little planet’s best morning apparition of 2013. And also in the same vicinity will be another object that many will be eagerly seeking out: Comet ISON which will be making an exceedingly close dash around the sun and "might" be also be a bright object.

If you can't get enough of triangles in our current evening sky, be sure to check out the scene soon after sunset on Tuesday evening (June 18), when a bright waxing gibbous moon joins the show. It will appear roughly three degrees to the lower left of Spica and about nine degrees to the right of Saturn.

On the very next evening (Wednesday, June 19), the somewhat wider gibbous moon will have shifted its position relative to both Spica and Saturn, appearing to be about 7 degrees below and to the left of the ringed planet and form a sort of "squashed triangle" in the southern sky. Remember that your clenched fist held at arm’s length measures roughly 10 degrees.

Editor's note: If you snap an amazing photo of Saturn in the night sky, or any other celestial object, and you'd like to share for a possible story or image gallery, please send images and comments, including location information, to Managing Editor Tariq Malik at spacephotos@space.com.