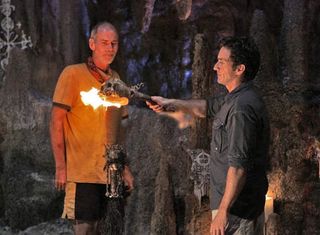 "I amsolid with five people. I know there is one person in front of me for sure ifwe were going to lose again," said Barry just moments before he was votedout.

The day hadstarted out well. Sitting alone on the beach of his team's "La Mina"camp, Barry was left alone to enjoy the sunrise.

"It'sbeautiful out here, another beautiful day in paradise."

"I'vebeen within 200 miles of this spot many times," said the veteran spaceexplorer, smiling while pointing straight up, "vertical."

Barry hadgood reason to feel secure. Four days less than halfway through the game's39-day isolated stay, he had survived twice being voted off at the TribalCouncil and he felt a strong bond with the three remaining men on his team. Ifsomeone was going next, it would be Sally, a 27 year old social worker and theodd-gal out.

As such,Barry felt it was due time to let the others know of his pre-Survivor profession.

"Wellit turns out I did a little more than just work on space shuttles,"explained Barry of the "NASA engineer" cover title he had been usingup to then. "Well, I had an opportunity to be aboard a few of 'em... whilethey were flying."

Named aNASA astronaut in 1992, Barry flew three times over his 13 years with the spaceagency. His first flight in 1996 was aboard Endeavour. He then flew twice againon Discovery in May 1999 and then in August 2001. His two later missions wereto the International Space Station. In total, he logged over 734 hours in spacewith nearly 26 of them outside the spacecraft.

"Itwasn't like hiding anything from you," explained Barry. "It wasbecause I didn't want to be the 'astronaut guy'. It was fun to be [just]Dan."

The newsleft the two younger men in awe of their new found and well-traveled friend.

"Inever thought I'd even meet an astronaut, never mind live with one,"confided Nick. "I mean the guy has looked at the Earth from space, so he'san incredible guy and I knew that from the start but to learn that, and howhumble he is about being an astronaut is pretty amazing."

"Heactually has dined with Neil Armstrong.'Danfuego' is a stud. I told you from theget-go, he's a pimp."

Over thefirst five episodes, Barry was shown tackling (with his team) Reward andImmunity challenges that involved digging up wooden snakes, launching balls byslingshot and balancing buckets as part of a brigade. Barry's strength wasn'this physical force but his mental acuity.

So when thesixth episode's joint Reward and Immunity challenge relied on Dan and Sally tosolve a puzzle, it played right into Barry's favor. The Panamanian barbeque andImmunity Idol was good as La Mina's. And therein lay Barry's fate.

"Howcan we lose a challenge with a puzzle when we have a NASA engineer on our team.I mean how do you do that?" asked Austin of Terry after their loss. Barryacknowledged his failure.

"Mywhole job [of being an astronaut] is about having a game plan in place and if it'snot quite working out, stepping back and I didn't do that. Instead, I picked upthe puzzle piece and started looking around at random," told Barry to Terry."You know what, if I did that in space, [we would] die."

Barry wouldhave been safe had it not been for another twist to the game. The winning team,Casaya, had the added bonus of selecting a La Mina castaway to be sent to theshow's title-inspiring Exile Island. Choosing Sally, they had in effect spared her from certainelimination. Sally would be absent from that evening's Tribal Council, leavingthe four men to pick amongst themselves.

Barryexpected a tie vote -- the younger Austin and Nick versus Terry and himself. Austin had other plans.

"This is ayoung person's game right now and we can take you a lot further in this than[Barry] can," reasoned Austin toTerry. "If Sally was here, obviously we would take her [out], butphysically, [Dan's] the weakest."

"Iknow this has to be incredibly difficult on Terry to even consider eliminatingDan. But someone has to go home and I don't want it to be me," said Austin to the camera.

Terryagreed but also respected the bond he had formed early with Barry.

"Danand I have something even more in common than anybody else, soaring through allkinds of heights above the Earth, and having to vote him off is a highlyemotional decision because he's something else. Dan has the right stuff."

"[Myteam was] very upfront with me to tell me that it's my turn tonight to go. Andtoday, three performed their job and two people didn't. One of those two peopleis immune and the other one is sitting right here. And I am willing to takeresponsibility."

"If itwas my choice this would go two [versus] two, and we'd have a little challengegoing on. I expected to last a lot longer than this," lamented Barry.

In the endthough, Barry had few regrets.

"Iwish them all the best. It was a wonderful adventure. I loved every day outhere. And the only thing I really have to say is thank you to my family forletting Dad go off on another crazy [adventure]."