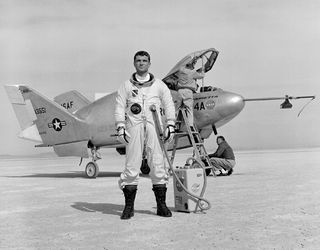 In this historical photo from the U.S. space agency, Air Force pilot Major Cecil Powell stands in front of the X-24A after a research flight in January of 1971.

Built for the Air Force by Martin Marietta, the X-24A was a bulbous vehicle shaped like a tear drop, with three vertical fins at the rear for directional control. It weighed 6,270 pounds, was just over 24 feet long, and had a width of nearly 14 feet. The first unpowered glide flight of the X-24A was on April 17, 1969. The pilot was Air Force Major Jerauld Gentry. Gentry also piloted the vehicle on its first powered flight March 19, 1970.

It was flown 28 times in a program which, like the HL-10, helped validate the concept that a space shuttle vehicle could be landed unpowered. Fastest speed in the X-24A was l,036 mph (Mach 1.6). The pilot was John Manke, who also reached the highest altitude in the vehicle, 71,400 feet. He was also the pilot on its final flight June 4, 1971. The X-24A was later modified with a different nose configuration and became the X-24B.