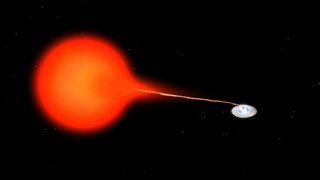 A strange pair of stars is much closer to Earth than scientists ever thought, a discovery that finally helps explain a puzzling mystery behind the stellar twins, scientists say.

The binary star system is made up of a normal star and a dense stellar remnant called a white dwarf. According to the new measurement, the star system is 372 light-years from Earth, not 520 light-years as previously thought. Known as SS Cygni, the star pair is one of the variable star systems most often observed in the sky, but until now, astronomers couldn't figure out why it behaves the way it does.

SS Cygni erupts in regular outbursts about once every 49 days, when it brightens to release significantly more light than normal. Such outbursts are considered normal for most star pairs of this type, called dwarf novas, but if SS Cygni was as far away as astronomers thought, this explanation didn't make sense. [Star Quiz: Test Your Stellar Smarts]

White dwarfs are known to pull mass off companion stars with their strong gravity. This stolen mass then swirls around the white dwarf in a rotating disk that feeds material directly onto the dense star. When the flow of mass onto the white dwarf slows down, though, the disk can become unstable and release a flare of light.

This should not have been the case for SS Cygni, however, if it truly was as far away as 520 light-years.

"That was a problem," astronomer James Miller-Jones of the International Centre for Radio Astronomy Research at Curtin University in Perth, Australia, said in a statement. "At that distance, SS Cygni would have been the brightest dwarf nova in the sky, and should have had enough mass moving through its disk to remain stable without any outbursts."

While the previous distance measurement came from Hubble Space Telescope observations, Miller-Jones and his team used radio telescopes — in particular, the Very Long Baseline Array spread across the United States and the European Very Long Baseline Interferometry Network in Europe and South Africa.

The scientists employed a method called parallax to pinpoint SS Cygni's location more accurately than ever before. Essentially, this method compares the apparent wobble of a foreground object — in this case, the double star system — against the relatively stable positions of background objects such as distant galaxies.

"If you hold your finger out at arm's length and move your head from side to side, you should see your finger appear to wobble against the background," Miller-Jones explained. "If you move your finger closer to your head, you'll see it starts to wobble more. We did the exact same thing with SS Cygni — we measured how far it moved against some very distant galaxies as the Earth moved around the sun."

The measurements could be made only during one of SS Cygni's outbursts, when it releases enough light in the radio frequency range to be seen clearly. The scientists collaborated with amateur astronomers from the American Association of Variable Star Observers (AAVSO) to know when to make their observations.

"The system only emits radio waves for a short period of time," said astronomer Matthew Templeton from the AAVSO, who is a co-author of the findings. "Without the cooperation of our many amateur observers who looked at SS Cygni night after night, we wouldn't have known when to look — their contribution was invaluable."