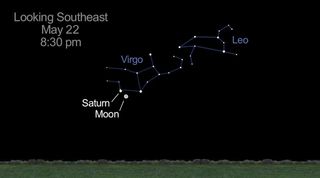 This sky map from NASA's Jet Propulsion Laboratory shows the locations of the constellations Leo and Virgo in relation to the moon and Saturn looking southeast on May 22, 2013.
(Image: © JPL)

On occasion I'll get an e-mail from someone who says they've just received a telescope as gift and while they've enjoyed looking at the moon and the planet Jupiter or Venus with it, they really would love to get a view of Saturn.

The problem for most people is that unlike Venus and Jupiter, which because their great brilliance readily stand out against background stars, or Mars because of its distinctive fiery orange color, there is nothing overly distinctive above Saturn when viewed with the naked eye. In terms of color, it appears white with a hint of yellow.  In terms of brightness, it certainly is quite bright, though it lacks the kind of "here I am!" brightness that Venus and Jupiter can boast.

But this spring and summer I can promise you this: You'll have no problem in identifying Saturn even if you can't make heads or tails out of a simple star chart. And on Wednesday night (May 22), the task will be made all the easier by the proximity of a waxing gibbous moon to the great ringed beauty. [Skywatching Events for May 2013]

Using the moon as your guide

Just wait until it gets sufficiently dark — say about one hour after sunset. Look about one-third of the way up from the horizon to the point directly overhead (called the zenith) and you'll see the moon. Most people will think it's a "full" moon, but that won't happen until late Friday night. The moon actually will be 94-percent illuminated.

Then look off to the left of the moon and a bit above it for a bright, non-twinkling star shining with a whitish-yellow glow. That will be Saturn.

Of course, from our Earthly vantage point, we know that the moon is much closer to us than Saturn. In fact, it's 3,673 times closer to be precise. On Wednesday, the moon will be 225,400 miles (363,000 km) away compared to 828 million miles (1.33 billion km) to Saturn. As such, the moon appears to move much more quickly against the background stars compared to Saturn. During the course of one hour, the moon moves to the east by roughly its own apparent diameter (about one-half degree).

That's why during the overnight hours of Wednesday night to Thursday morning, the moon's position relative to Saturn will noticeably change. By 1:30 a.m. local daylight time — if you're still awake — look toward the southwest sky for the moon and Saturn. The direction you'll need to face by then will have changed thanks to the rotation of the Earth.

But notice also that the moon's position relative to Saturn has changed; now Saturn is not to the moon's left, but soaring almost directly above it. That's because the moon will have moved about 2 degrees — four moon widths — to the east of Saturn over that four-hour time frame.

Of course on other nights you won't be able to use the moon to find Saturn, since it will have moved to another part of the sky. I mentioned, however, that you wouldn't have any difficulty in identifying Saturn and that's true too, because this spring and summer Saturn will be part of a bright and conspicuous triangle in the sky.

Not to be confused with the famous Summer Triangle (now emerging into view in the east-northeast), we can see an almost perfect isosceles triangle covering the southeast part of the sky.

This triangle is formed by the bright stars Arcturus, Spica and Saturn. The triangle appears to point almost straight up, with the brilliant yellow-orange star Arcturus at the vertex. The bluish star Spica and Saturn form the bottom of the Triangle; Spica is on the right and Saturn is on the left. Even from a brightly lit city you should be able to make out this triangle, and once you see it you should have no trouble recognizing it on other nights.

And now you know where to point your telescope to see Saturn.

And of course, through a telescope magnifying by at least 30-power, Saturn is quite a spectacle! Saturn's amazing rings are currently tilted about 17.5 degrees, with its north face exposed. Try also to see Titan, Saturn's brightest moon. It will appear as a tiny star, and should be readily visible at its greatest eastern elongation (four ring lengths from the rings' edge) on the night of May 27.