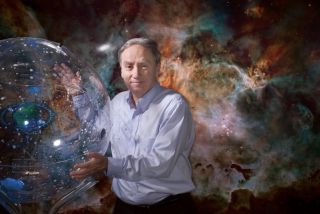 Everyone makes mistakes — even Einstein. The truth is, many of the world's greatest scientists made significant blunders along the path toward genius, which should be comforting news for the rest of us.

To illustrate this reality, astrophysicist Mario Livio of the Space Telescope Science Institute in Baltimore, Md., highlights five of the biggest mistakes in scientific history in his new book "Brilliant Blunders" (Simon & Schuster, May 2013). Livio tells the stories of errors by Charles Darwin, Sir William Thomson (Lord Kelvin), Linus Pauling, Fred Hoyle, and Albert Einstein. SPACE.com caught up with Livio to find out just what qualifies as a brilliant blunder, and what we can all learn from these famous mistakes.

What separates a "brilliant blunder" from a just plain blunder?

The things I tried to refer to as brilliant blunders are blunders that are made when you're trying to think innovatively, trying to have a big idea. These are blunders that are produced when you took a calculated risk with the potential for a big reward. These are not done because the scientist is sloppy or not careful in what they do, or because the scientist is inexperienced. To get a breakthrough, you need to be able to embrace a risk. [Most Amazing Hubble Discoveries]

In addition, of course, the people I particularly chose, they were also brilliant by themselves.

Was it difficult to choose just five blunders to profile in your book? Are there many more "brilliant blunders" out there?

There is something to be learned from every mistake.

Do you think all great scientists have made significant blunders along the way?

I must say there are some that make more of these than others. [Isaac] Newton was particularly annoying in the sense that he almost made no mistakes.

Have you ever made any brilliant blunders of your own?

I've certainly made many mistakes during my scientific career. I'm not sure that any one of those could be called a brilliant blunder.

What do you think the average person can learn from these genius' blunders?

Number one is, even geniuses can make major blunders. I think that should be comforting to most.

The second and perhaps more important thing is about the creative process. In order to get important discoveries or real breakthroughs, you need what we call 'thinking outside the box.' When you think outside the box you necessarily have to accept the fact that maybe you will be making a blunder. But if you accept that, you increase your chances of getting something that is really important, as opposed to playing it safe all the time and getting very slow incremental progress. We really need to think more about how do we allow in a variety of creative processes, realizing that that may lead to a blunder but it also has the potential to lead to something big.

Do you see any overarching theme among the blunders you detail in the book?

One thing that you realize is that all of these different  evolutions are really very intimately related to one another. The universe evolved, and that's what allowed galaxies to form within it. As stars evolved, that's what formed those elements that at the end gave rise to planets and eventually to life. Really, we tend to think of these different evolutions as if they are different disciplines, but in fact they are very closely related. And of course they are all driven, ultimately, by the laws of physics, even though we are not at the stage where we can describe biology by the laws of physics. That's another thing I hope will come out of this book.