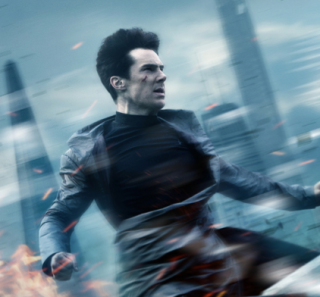 Star Trek Into Darkness Review
Rama Rating: 10 out of 10

Look, I won’t sugar coat it. I absolutely loved Star Trek Into Darkness. As a fan of the first movie, and a longtime casual fan of the franchise in general (my father obsessively watched re-runs of the original series while I was growing up, so I can probably quote most of it), I thought it found a great way to do nostalgia, action, drama, heartfelt moments, comedy, and move the franchise forward – even better than the first Abrams Star Trek film.

Ultimately, that’s all you can really want from a sequel, and something you very rarely get – it was better than the first in virtually every way. [Enterprise Flies Again in "Star Trek Into Darkness" (Photos)]

Without getting into any spoilers, Benedict Cumberbatch’s villain John Harrison was engaging. There’s a cold calculation that was missing from the first film’s constantly-furious villain.

His quiet, calm demeanor pulls you in so that when he unleashes, you’re right there in his face, and the burst of anger hits you just as hard as his punches. It’s hard to fully explain without any spoilers, but as much fun as Sherlock is, Into Darkness makes me want to see Cumberbatch as nothing but villains for the rest of his career.

Viewing the movie in IMAX 3D is an experience unto itself, and definitely helped pull those quiet moments into the same excitement level as the massive action sequences, of which there are plenty. Interestingly, the villains involved make allegiances change so rapidly, at times you won’t completely know who you should be cheering for as phasers blast, explosions ring, and yes, (MINOR SPOILER) batleths clang.

But what makes the movie so great? It’s the heart. The relationships that were established in the first carry into the second, and while Spock and Uhura’s romantic relationship gets touched on, there are much deeper moments for fathers and children, and the entire movie is bookended by the incredible friendship between Spock and James T. Kirk. Their friendship evolves more significantly in this two hour film than it ever really did in the original Star Trek series. It’s an incredible feat to see play out, and really, it shows how important both characters are to the franchise. While everyone knows the household name of Captain Kirk, this movie is definitely Spock’s moment in the spotlight, and it is better for it.

That’s not to say Kirk doesn’t have his moments, but this movie, even more than the first, is such an ensemble effort, with Uhura stepping up, Sulu taking an important seat, Chekov thrust into a new role, Scotty being a hero, and of course Kirk flying (literally) into action. If there’s one small disappointment, it’s in Alice Eve’s new-to-the-cast character Dr. Carol Marcus. While she plays an important role in resolving a few major moments, she felt more like a plot device than a fully realized character. Maybe something can be done there in a future film.

Star Trek Into Darkness is truly better in every way: it’s fun, moving, exciting, with great bits of humor and nostalgia that remind you why you love Star Trek as a franchise (or for newcomers should tell them what’s so great about it in the first place). While the movie does focus more on action than exploration – the original motive for the franchise’s Federation – that is directly addressed more than once: they know they’re doing things differently, and aren’t afraid to tell you why.

If you enjoyed Star Trek, I don’t know how you could not love Star Trek Into Darkness. If you have the means to see it in IMAX 3D, it’s worth the extra few bucks for the increased spectacle of it all. If you know nothing of Benedict Cumberbatch, be prepared to have a new favorite actor. If you love Spock, be prepared to do some hooting and clapping. If you just want a fun Summer action movie, you’re set. If you want your heartstrings yanked and your mind set thinking about morality and hard choices, you’re good, too. Star Trek Into Darkness sets a new high for this year’s Summer set, and should leave fans anxiously awaiting Abrams’ next big franchise adventure.

This story was provided by SPACE.com's sister site Newsarama.