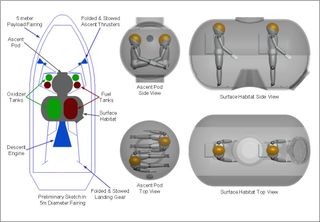 A private space exploration company's plans to build a novel moonship to return human explorers to the lunar surface has moved one step closer to reality.

Aerospace giant Northrop Grumman has completed a lunar lander feasiblity study for the Golden Spike Company, which aims to begin ferrying paying customers to the moon and back by 2020.

The study came up with a new design that consists of a descent stage with a surface habitat and a lightweight ascent vehicle dubbed "Pumpkin," all of which would fit inside a 16.5-foot-wide (5 meters) rocket fairing for launch. [Golden Spike's Manned Moon Plans (Photos)]

"This concept has significant operability advantages for surface exploration since the surface habitat can be segmented to isolate lunar dust and provides more space for living and for selecting the most valuable lunar return samples," Northrop Grumman study lead Martin McLaughlin said in a statement.

"We affectionately call the minimalist ascent pod 'Pumpkin' because of its spherical shape and because it returns the crew to orbit after the surface exploration party," he added.

Golden Spike, which was named after the final spike pounded into the United States' First Transcontinental Railroad in 1869, aims to send two-person crews to the moon and back by the end of the decade. The company originally pegged ticket prices at $750 million per seat, but revenue from media rights and merchandising could end up cutting that by perhaps 30 percent, officials have said.

The company thinks its services will be attractive to a variety of research institutions, corporations and countries, particularly nations that lack big-time space programs.

Golden Spike officials were pleased with the results of the recently completed lander study, but the company is not locked into building Pumpkin or any of the other components at this point.

"It's revolutionary. We've got the approximate capability of an Apollo lander in roughly half the mass — a huge advantage in terms of the total mass of the system," Golden Spike president and CEO Alan Stern, a former NASA science chief, told SPACE.com.

"We have equal or more habitable volume and have likely solved the problem with too much dust in the cabin going up to orbit," Stern added. "Pumpkin may not be what we ultimately end up with, but it is a huge forward step. No one's really looked at a lander like this. We are pretty excited about it."

Northrop Grumman and its legacy companies — Grumman Aerospace and TRW — built the very first manned moon landers back in the 1960s, for NASA's Apollo program.